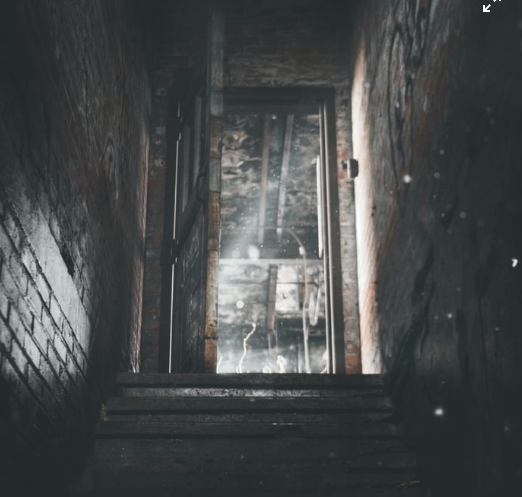 Jerry closed the basement door behind him and listened to the clinking of chains on the other side of the door.  He waited for the clunk from the lock to snap shut.  There, he was bolted in, buried beneath the earth.  The image of his father behind the door filled his mind.

Tears welled in Jerry’s eyes as he breathed in the dank air and surveyed the sparsely decorated room.  There was a single mattress on the floor.  A pillow sat on top of a neatly folded blanket.  Bottles of water and food for a few days were placed on a table. A lonely chair parked against the wall.

The drug counsellor said it was going to be tough but I have to do this.  I want to do this.

Shaking with fear, Jerry lay down on the mattress.  He waited for the terror to consume him.  The nausea had already started.  The silence and loneliness clawed at his heart, souring his mouth.  He sobbed and stared at the threadbare carpet trying to hold on. Then something moved.  A cockroach darted from one spot to the next, stopping for a few seconds before sprinting to the next spot.

“Hello?” Jerry called out to the cockroach.

Jerry choked on the saltiness of his tears and snots when he opened his mouth to speak. He reached out to the little dark brown creature.

Jerry pulled his shivering body up and staggered to the table where the food sat. He tore off little bits of breads and laid them gently near the cockroach.

The cockroach went up to the crumb nearest to him and nibbled.

Jerry grinned and felt lighter despite the feverish fire burning inside him.  He was drenched in this windless hole but he felt good. It’s HOPE, a sensation that he had not felt in years and had almost forgotten.

I have a friend.

Jerry laughed and cried in turn.   Then he got to work.  He made a little box for his little friend to hide in; lids for water bowls and a buffet of bread crumbs lovingly spread out in a line.

The cockroach seemed to take a liking to his new surrounding.  He hung around and explored all the available facilities.  Jerry watched his every move with warmth and pride, perhaps like a father would a son.

Dad, I’m sorry.  It must be awful for you to hear my shame outside that door.  Thanks for promising to not let me out until the devil is gone, no matter how hard I yell or beg.  Wait for me. I’ll see you soon.

Jerry closed his eyes and let sleep overcome him.  He knew that this time would be different.  He would make this.  He was no longer alone.  He would come through the other side and see his father’s face again.