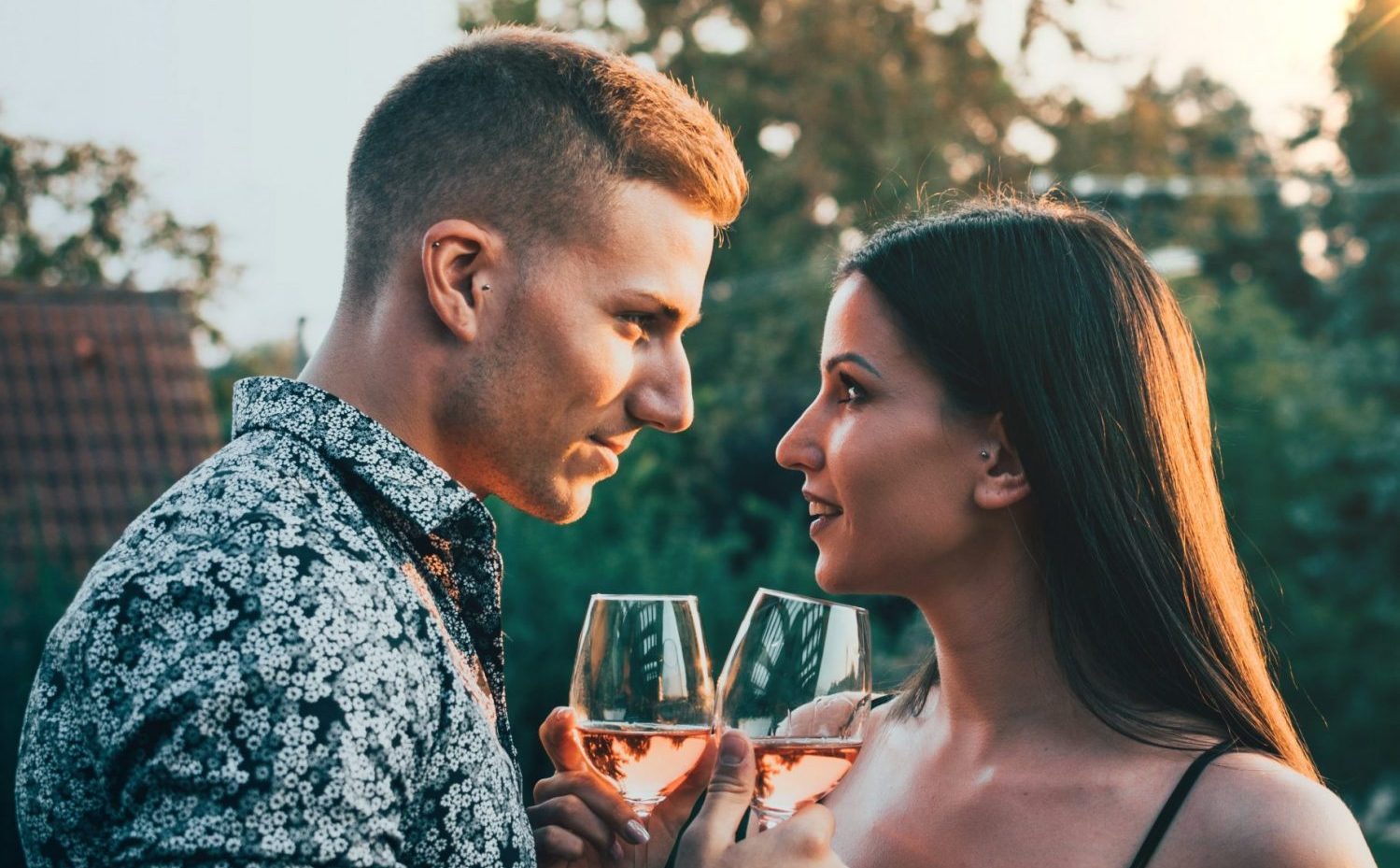 Aine scanned around the dimly lit hotel ballroom. The bejewelled curtain backdrop behind the empty top table sparkled under the glow of the pink fluorescent floor lamps. The top table sat vacant, awaiting the arrival of the wedding party and the new Mr and Mrs Whelan. The gold chairs were aligned perfectly by the anxious banqueting manager, desperately trying to ensure everything was perfect for the happy couple.

At the bar, a group of men stood around clutching pints of Guinness and subtly unbuttoned their top shirt buttons, away from the watchful gaze of their wives and girlfriends. At the back of the group Aine could see Gary emerge, jacket already discarded and his face shiny and glowing showing the effects of some earlier pints. Aine sighed and fidgeted with her new dangly earring. The bar would be his location for the night now. Meanwhile she would be left to make small talk with whomever was at her table and entertain herself.

Normally Aine loved weddings; the excitement leading up to the day, getting her tan done and picking out a dress that made her look fabulous. She loved getting dressed up and getting her hair and makeup done by the professionals. However Aine was less than enthusiastic about this wedding. Gary hadn’t even noticed she had made an effort, and she would be inundated with the calls of “You will be next” and “When are you going to give us a day out?” She was tired of coming up with witty retorts. Tired of pretending she had no interest in marriage.

The truth was Aine longed for her own big day out. She longed to look into her new husband’s eyes and beam from ear to ear like so many of her friends had done before her. She had been going out with Gary for 6 years, they had gotten together long before the now Mr and Mrs Whelan. However, despite her subtle hints, Gary showed no sign of dropping down to one knee anytime soon and Aine was getting increasingly anxious about it.

It wasn’t so much the wedding Aine yearned for, she thought suddenly as she noticed guests starting to fill the empty ballroom and a flower girl chase the pageboy around the shiny wooden dance floor. It was the children after the wedding that she really wanted. She would be 32 next month. If they did get engaged soon it would be at least another year before the wedding could take place. Aine’s thoughts now began to spiral anxiously and she could feel the palms of her hands and top lip becoming moist.

Suddenly in a bad mood, Aine dabbed the perspiration from her top lip and stood up. She needed some cool air and to gather herself. She strode purposefully across the ballroom and towards the ladies bathroom. She could feel eyes on her as she walked but she dare not turn to see who they belonged to as she could feel the tears begin to gather at the corner of her eyes. She would be dammed if she was going to ruin her fancy eye makeup over her own stupid anxiety.

As Aine returned to the table following her mindful minute in the toilet, she noticed her chair had been taken by a broad set of shoulders with a tight neat haircut. In no mood to talk to one of Gary’s drunken friends, who had taken her seat by accident, Aine squared herself to dislodge the infiltrator.

“Excuse me, that was my seat, can you move please.” The shoulders turned with a fright and immediately stood up from the seat.

“Oh, I’m sorry I thought it was vacant, here let me pull out the chair for you”.

Aine froze. The square shoulders were attached to the most handsome face she had ever seen. His eyes twinkled at her and the corner of his mouth began to twitch as he noted Aine’s reaction.

“My lady” he propositioned to the vacant chair and Aine stumbled forward on to it, cursing herself for her initial falter.

“Thank you and don’t let it happen again” she replied curtly although she was not able to have her face match her tone, as a big smile spread across her face as she gazed at the man next to her.

“I’m Ross” he said offering his hand in greeting and sitting down at the vacant seat next to her.

“Aine” she replied and shook his hand. A frisson of electricity surged through her body at his touch. His hand, warm and strong clasped around hers, immediately started to make her palms sweat and a feeling deep inside her began to stir. Were they holding hands longer than was necessary Aine mused, enjoying the feeling of Ross’ eyes on her?

“Where is this dinner, I’m starving?” Aine’s muses were interrupted by Gary returning from the bar and sitting on the other side of her. She quickly took back her hand from Ross and studied the dinner menu in front of her.

Throughout the dinner Aine spoke to Ross. He asked questions about her job, her family, her connection with the Whelans’ and listened intently, nodding his head to show his interest. He topped up her water glass without asking, passed her the butter, and when Gary came back from the bar with yet another drink for himself and none for her, he signaled to the waiter to top up her wine glass.

Gary in contrast barely acknowledged her presence. He was deeply engrossed with the guy beside him discussing Manchester United’s plight and should Alex Ferguson come out of retirement to save them. The only conversation between Aine and Gary during dinner surrounded the leftover beef that remained on her plate and whether or not he should eat it or save room for dessert!

As the dinner ended and the best man quietened the room for the speeches, Aine could feel Ross’ leg under the table move closer. Was she imagining it or could she actually feel the heat from his leg alongside hers?

Aine was giddy and guilty in equal parts; she could not concentrate on the speeches. Instead she was imagining what Ross’ strong legs might look like and how they might feel if she touched them. Then suddenly reality would slap her out of her fantasy and the guilty feeling about thinking about another man,would quickly dampen any giddiness.

Later that night Aine picked up Gary’s discarded jacket from the table and walked across the now empty dance floor to where he stood, as he had all night, at the bar.

“Gary, can we go to bed now, I’m wrecked and my feet are killing me!”

“Ah babe, all the lads are heading to the residents’ bar, come on you can sing! It will be great craic!”.

Knowing that nagging or appealing to Gary’s long lost chivalrous nature would not work at this hour, Aine lowered her voice and whispered in his ear,

“We’ve got an empty hotel room and I have got no knickers on…” Gary turned and looked at Aine for the first time all day.

“Ok babe, I’ll just have the one and come straight up” he kissed her on the cheek and followed the lads out the door to the resident’s bar.

Angry and upset Aine headed up to the empty hotel room alone. She washed her face and put on her comfy pj’s. After six years with Gary she knew he was never having ‘the one’. As she lay in bed dejected, her thoughts drifted back to Ross. She had learned earlier that night that he was a college friend of the happy couple. With detective skills of a budding sleuth, Aine easily found him on Facebook and began scrolling through his pictures.

I should send him a friend request, we are friends of friends there is no harm in that. Fuelled by too many gin and tonics and the desperate and lonely feeling in her soul, Aine sent the request. Sure, he probably won’t remember me she thought as she drifted off to sleep.