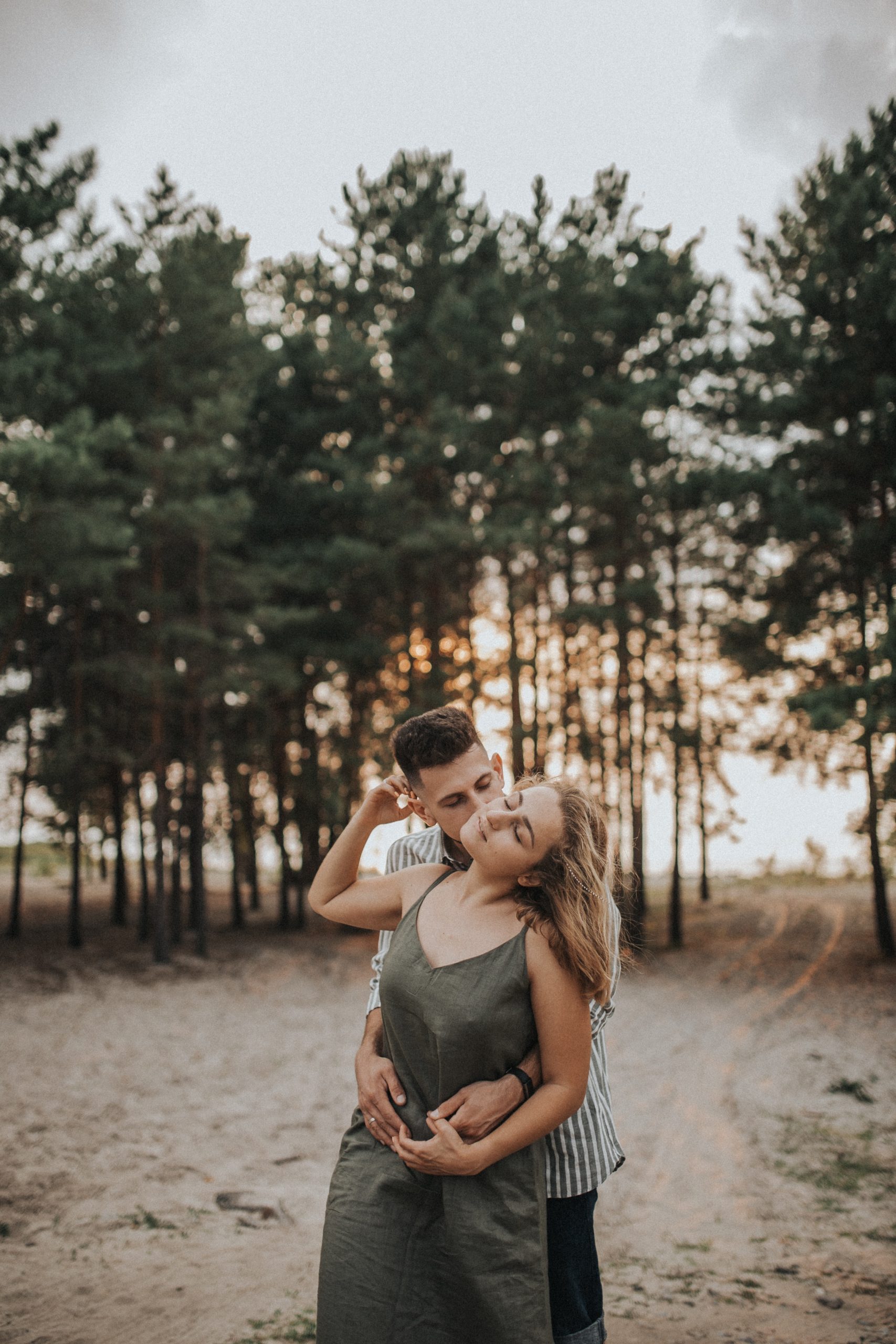 Jenna could not believe her luck as she followed Jeremy down the sandy wooden path that led to the beach. Was this guy for real? She had never had a date quite like it, never mind a first date! He had arrived to collect her with flowers, the smell of the roses still lingered in her nostrils. He complimented her and held the door open for her as she slid gracefully into the passenger seat of his car. Jeremy drove them to a romantic restaurant with beautiful sea views where they dined by candlelight. Over dinner he asked her questions and listened attentively as she spoke. And now, after dinner they were strolling to the beach hand in hand to look at the stars. This was the most elaborate and yet perfect date Jenna had ever been on!

Jenna quickly texted her roommate Emma to tell her about the stargazing. She felt smug and so happy that finally she had a good date story to tell her friend. She hurried after Jeremy, her steps as wide as her smile as she bounded onto the sand. As she reached him, the sounds of the traffic were replaced by the waves washing onto the shore. Jeremy grabbed her hand and wound his fingers tightly around hers. He pulled her close towards him, his stare so intense as he took a stray hair from her face and tucked it behind her ear. Jenna’s stomach contracted. She had never had so much attention and delicacy from a man before. Her earlier hesitancy about going on a blind date slowly evaporated as she shyly looked away from him.

Jenna was new to the online dating scene. She had spent months being convinced by her friends to download the app and start swiping. She had trawled through hundreds of pictures and spent hours perfecting her own. She was determined to display the right balance of fun but smart. After matching with several possible suitors, she had scrutinized their images and carefully interrogated her matches for any red flags. The hard work had been worth it she thought as the smell of the sea greeted her.

“Come on” he whispered in her ear and gently tugged her hand and led her down the beach. A giggle escaped from Jenna’s mouth as she followed. She was thrilled of the spontaneity and romance of the night. When they had walked quite far down the beach, Jenna noticed how much darker it was away from the path and the boardwalk lights. The sea breeze now crept up around her and tossed her hair around her face. Her sundress now danced up her thighs.

“It’s actually quite chilly now” Jenna called she rubbed her arm with her hand and desperately tried to keep her skirt down with the other. “Maybe we should save the stargazing for another night?”

“Don’t worry beautiful I’ll keep you warm. Come here…” Jeremy took off his blazer and placed it on the sand in front of them. He lay down on his back and beckoned Jenna to join him with his arms outstretched. Jenna looked around at the deserted beach and hesitated slightly. “I do this all the time, once you lie on your back and see this view, you won’t regret it” he smiled and encouraged her onto the sand.

Jenna lay down beside him and he pulled her close under his arm and onto his chest. They both looked up at the night sky. Jenna’s breathing quickened as she realized how close she was to Jeremy. The sound of the waves a distant murmur to the beating in her chest. “Hmm not much stars tonight” Jenna chirped nervously as she stared at the black cloudy sky.

“Well then what else could we do here?” Jeremy pulled himself up onto his elbow and turned to face Jenna. He kissed her lightly on the lips and then moved away, studying her face for a reaction. “Did you like that?”

“Em… yes. I liked it” Jenna normally so confident, was suddenly shy. She shivered. “Well then I want to keep doing what you like” Jeremy whispered in her ear and began kissing her neck. He moved on top of her and buried his head into her neck. Jenna could feel the weight of him pressing down on top of her. She could feel he wanted more. She pulled his face from her neck and back to her lips. She kissed him gently, cautiously trying to slow down his urge.

Jeremy kissed her back passionately, his hands grew hungrier and moved down her body. He grabbed at her breasts and again buried his head into her neck. “Jeremy… hey, let’s slow down a little” Jenna tried to caress his back and pull him back towards her gently. Jeremy pressed harder against her pushing her further back into the sand beneath. His right hand furiously clutched at her breast and his left hand grabbed between her thighs. “I knew you wanted me. I knew you wanted this” Jeremy growled in her ear and began unzipping his jeans.

Jenna struggled beneath Jeremy, she was unable to move with his weight crushing down on her. “No Jeremy! Stop! I don’t want this, please stop!” Jenna’s voice grew more urgent. She wriggled beneath him desperately trying to force his hands away from her vagina. His fingers were rough and aggressive and they hurt as he forced them inside her. “It’s ok, I know you like this, I know you want me inside you, why else did you wear this dress” Jeremy pulled his fingers out from inside her and moved his hips upwards. Jenna winced and desperately tried to haul herself up the sand. “Please stop! Jeremy please!” Jenna wailed tears streamed down her face as she scrambled on the sand. She could not get a grip to push herself up, she could not push his body off her. She hammered her fists against his back, she clawed at his hair. She screamed into the black night sky, pleading with him to stop. As he lifted his hips again and pulled down his jeans, Jenna wriggled beneath him. With her legs now free, she drew her knees up to meet her chest. She drove her knees upwards as hard as she could. One knee connected swiftly with Jeremys free manhood “Oargh!!” Jeremy let out a cry and rolled onto his side clutching his penis in his hands.

Jenna seeing her chance jumped up and ran down the beach as fast as she could. She stumbled several times, the sand thwarted her desperate get away. “Bitch! You wanted this! You asked for this… you prick-tease!” Jeremy called after her still holding his bruised genitals.

Jenna sobbed as she ran, her breath caught in her throat. She coughed and gasped for air but she never stopped to catch it. Her chest was so tight as she ran, she thought it might burst. Jenna ran onto the board walk and across the street to the restaurant they had eaten at earlier. She didn’t notice the traffic or people gathered around outside. The sounds of the late night revelry lost on her ears. Jenna saw a taxi rank and ran straight to the first cab, not seeing the line that had been waiting. She jumped into the back seat and slammed the door shut. Gulping she gave the driver her address and shivered. Her shaking hands tried to put her seat belt on, her body was on auto pilot. She pulled at her dress pushing it further and further down her legs. She dragged and pulled at the fabric desperately trying to make it cover more of her legs as the taxi meandered through the night.

Jenna sobbed the entire journey home, convulsing as the taxi turned corner after corner. Eventually they pulled up outside her apartment block and Jenna’s shaking hands gave the driver her bank card. He studied her face in the mirror as he waited for the machine to process her payment. Jenna already had the car door open, desperate to reach the safety of her apartment. “Now there you go.” The driver handed Jenna her card and turned to face her. “A good-looking girl like you shouldn’t be so upset” he quipped. Jenna stared at the driver and then quickly grabbed her card and ran home. She burst into her apartment and immediately double locked the door behind her. She ran to her bedroom and closed the door shutting the world out behind her. She stared at the bed full of dresses, skirts and tops that she had tried on earlier that evening. She sank to the floor and wept.