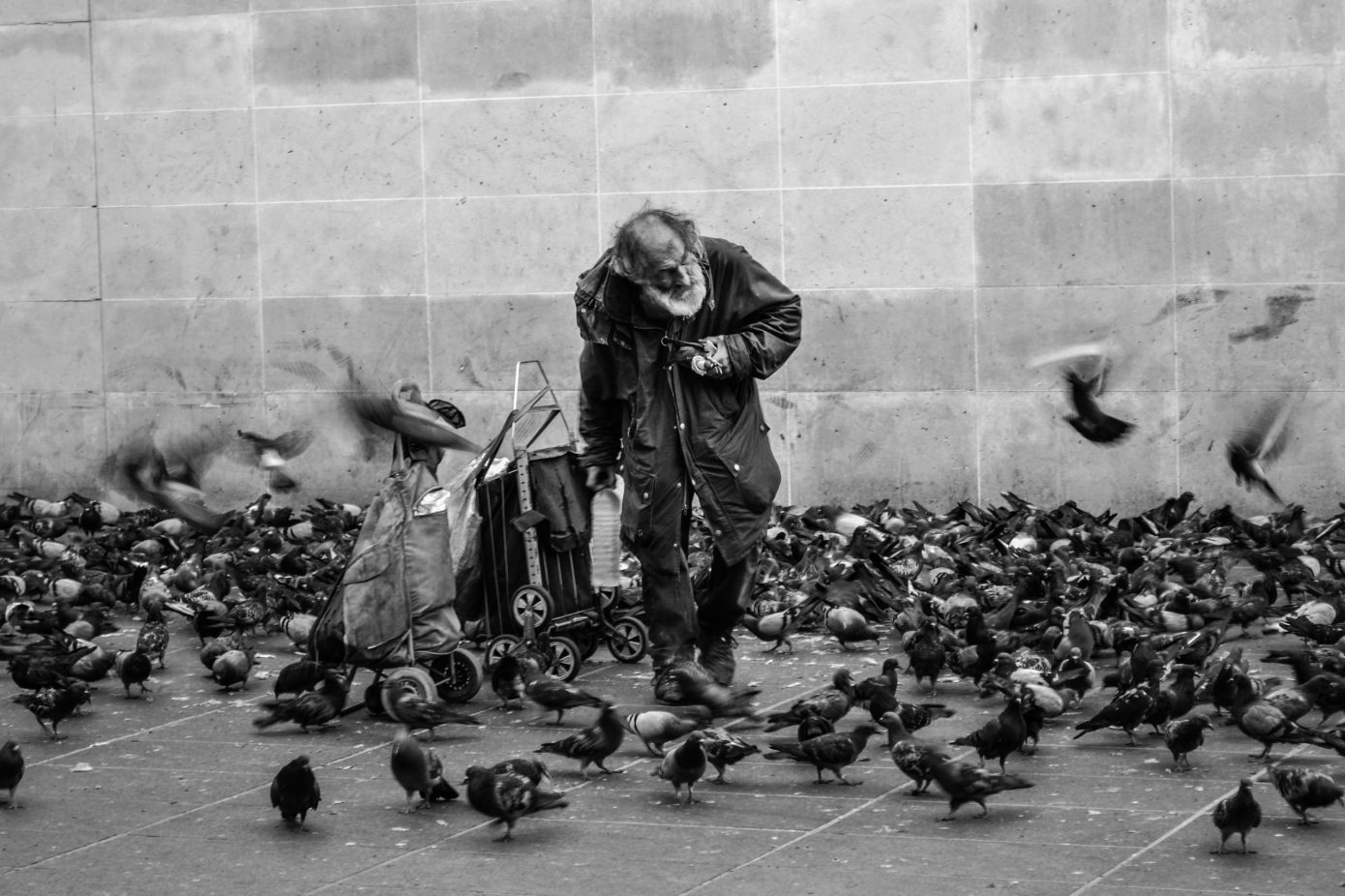 Geoffrey walked along a narrow lane of boutique shops up to the main road. Two lanes of night time traffic swirled past, either coming or going; a parking lane lined with cars waited to the side. Beneath an awning two youths waited for a bus, dressed in their uniform of baggy jeans and oversized sweat shirts. One wore a baseball cap backwards.

Geoffrey paused, took a deep breath and studied the two young men.  One lay in a hospital bed, a depleted figure scarcely making an imprint beneath the sheets. The other was also in a bed, but it seemed to be at home. A photo on the wall and two mourners stood next to the bed. Geoffrey turned his back on the two young men, and shook his head in despair.

A full bus came, passengers crammed on seats and standing in the aisle.  Listless faces stared out of the wide windows at the line of shops, the footpath, the cars, and at Geoffrey.

For Geoffrey however, it was a mass hearse. In the twenty seconds it took for a few people to alight and the two young men to board the bus, a parade of last moments assaulted Geoffrey’s soul. Hospital beds were crammed together, with relatives weeping alongside, there was an accident of some kind, another car perhaps, and a man in his fifties in running gear lying in open grassland. He gasped at someone hanging by his neck in a garage. Then the bus door shut with a peremptory hiss and the bus moved off into the gentle hum of the evening’s traffic.

Geoffrey sat in the bus stop bench, exhausted, shaking and panting. He could hear his heart beat in his temples.  A headache stretched tautly wired across his forehead. But he was thankful that, for the moment, he was the only person there.  Cars passed in a uniform flow. Headlights cast moving shadows along the line of parked vehicles and bounced off the plate glass shopfronts. The awning shielded much of the pavement from the sparse streetlights, but above them, the light played across the variegated filigree on the upper levels in a checkerboard of light and shadow. One window was alight. Through it Geoffrey could make out a couple playing ping pong in their underwear. After one round, the woman threw her arms in the air in a joyful gesture and did a brief circular dance before waving her bat at her opponent. He saw her laugh. He saw her lying in a hospital bed, with an old man beside her. He hoped it was her ping pong playing opponent.

A rank odour seared his little reverie.  A hobo had seated himself at the end of the bench. His old canvas overcoat was black and dank. He was balding, and a greasy mess of side hair obscured almost all of his grimy features. A red scab scoured his lips and his nose leaked a viscous cream on to a grizzled beard. He raised his head and glared angrily at something in front of him, and yelled,

“Ya think ya know everything? Do ya? Well don’t believe everything you see, dick. There’s fish in the trees, yeah? Fish, in the trees. Tomorrow, you know that? Fish, you’ll see. In the fucking trees. You don’t believe me? You’ll see, tomorrow! Dick!” His arms flailed about him as he fought off an invisible spectre, growling and snarling.

He stopped and let out a loud hacking cough, and spat out a spiralling globule of phlegm that hit the road with a smack.

When he had stopped coughing he looked at Geoffrey and said,

Geoffrey blinked in the foulness of the man’s stench, and stared at the timeless black beads that were his eyes. He lay in a rear lane, pushed like a pile of mouldy carpet against a paling fence, dead hand still clutching an empty bottle. It was 11pm tomorrow.

Geoffrey rose, partly to escape the man’s eye-watering miasma, and partly in shock of what he had just observed. This was the first time he had a clear premonition of, not only the circumstances of a person’s death, but also its time and date. Appalled, he moved back into the shadows of the awning. He pulled out his wallet and placed a ten dollar bill on the end of the bench.

“For a last hurrah,” he said, and quickly retreated again.

The man snatched it, and said with a crusty smile,

“A tenner! Tomorrow will be a good day!”

He picked up a filthy shopping bag and toddled off down the street, holding the blue banknote in the air. “A tenner! A tenner! Goan fishin!” he sang, as he slowly merged with the night.

Geoffrey leant against a darkened shopfront pondering where all this was heading. First a premonition of Slabs’ accident, then the irrepressible visions of final moments, and now this, the specifics of time and date. He was more convinced now, that this was not some madness but a foretelling of a future truth.

He wondered where it might stop. Surely time, date and place were enough. He couldn’t bear any more. What else would he see?  The cause of death? The events leading up to it? The weeks, or months, or even years? In the space of only a few hours he had gone from a vague feeling of doom, to time, date and place; how soon would his mind be fattened with an excess of details about those he dared to look at? Would he ever be able to look anyone in the eye and see them there and then, and not in some awkward appointment with death?

For the umpteenth time that night his body shook with rage and fear, and his breath grew heavy. Why him? I’m just an auditor, a simple bloke with no extraordinary ambitions. I just wanted a peaceful life. Tears escaped from him in fitful sobs, and he stood beneath the awning, in the black of his fears.

When he had calmed a little, he started walking up the street, keeping hidden from the lights. He paused outside another hotel. It was closed, with bar stools upended on tables like carousing mannequins.  Liquor bottles and glasses stood like tidy spectators behind the quiet bar. He wondered if he should go home. Bus, cab or uber? A bus risked a repeat of his visions. He had had enough for one night. The few empty cabs he saw were heading the wrong way. He pulled out his phone to book an uber. There was a text from Lucy.

It was a thread of hope in a horrible night. But how could he tell her about all he had experienced? She probably thought he had been affected by Slabs’ death, and yes he had, but it was overshadowed by the rest of the evening. How would anyone understand that? How could he burden her with that? He thought he should reply “Thanks, have a good life” or something equally determinative, but considered that was too rude. So he typed,

Rajiv, the keen young Uber driver twisted round in his seat to look at Geoffrey.

The bed Rajiv was dying in was surrounded by relatives. A silver haired old lady – probably his widow – sat in a chair alongside the bed. Four adults – probably children – stood alongside, and a smattering of grandchildren stood around. Rajiv’s forehead was painted with an ashen paste, and a stick of incense smouldered amid a rosary of flowers on the shelf above the bed. A picture of some kind had been turned to face the wall. It was seventy-four years from now. September 14. 11.23am.

“No, thanks,” said Geoffrey.

“You are looking a bit white, my friend.”

“I am sorry to hear that. You know, some others have been having rough nights too. I heard there was an accident near here earlier tonight, a very bad one too. Perhaps you would like some music. I have been enjoying Elton John right now. Are you sure you would not like a mint?”

Geoffrey sat huddled in the back seat of the Toyota Corolla sucking on the lifesaver Rajiv had given him, as Rocket Man flailed from the small speakers in the doors. Trees shot past them, more cars, a stream of buildings. He hunkered down to get a glimpse of the night above, but clouds obscured the sky, underlit by the wash of the city’s gleam.

When the car pulled up outside Geoffrey’s apartment block, Rajiv turned around and said,

“Good night, Mr Geoffrey. I hope you have a restful night.”

Geoffrey looked at his smiling face, full of professional ardour and willingness. He said,

“Rajiv, I know for a fact, you will have a long and prosperous life, with a wonderful family to support you.”

“It is very kind of you to say that.”

Geoffrey shut his apartment door behind him and breathed a sigh of relief. Home sweet home. He looked about at the polished floorboards – many a weekend’s work sanding and staining those– the white walls he had painted, and the high moulded ceilings with their cornucopia of lilies and daisies set in large squares. The kitchen was a special joy, its modern marble bench a fine contrast to the art deco tracery of the old apartment. Behind the bench, the cooktop and sink shone in stainless steel. On the other side, a spacious living/dining room accommodated a splendidly comfortable couch, on which many hours had passed engrossed in the smart TV on the wall above the old fireplace.

His flat was a safe haven, and he yearned for bed. He was exhausted. Quick teeth, then bed, that would be easy, and then sleep.  He smiled and held back a tear, and ran a hand through his hair. He was about to open his bathroom door when a leaden pall crushed his calm. He was not safe. Brushing his teeth meant looking in the bathroom mirror.

What would he see?