The Moving Pen | The Teacher 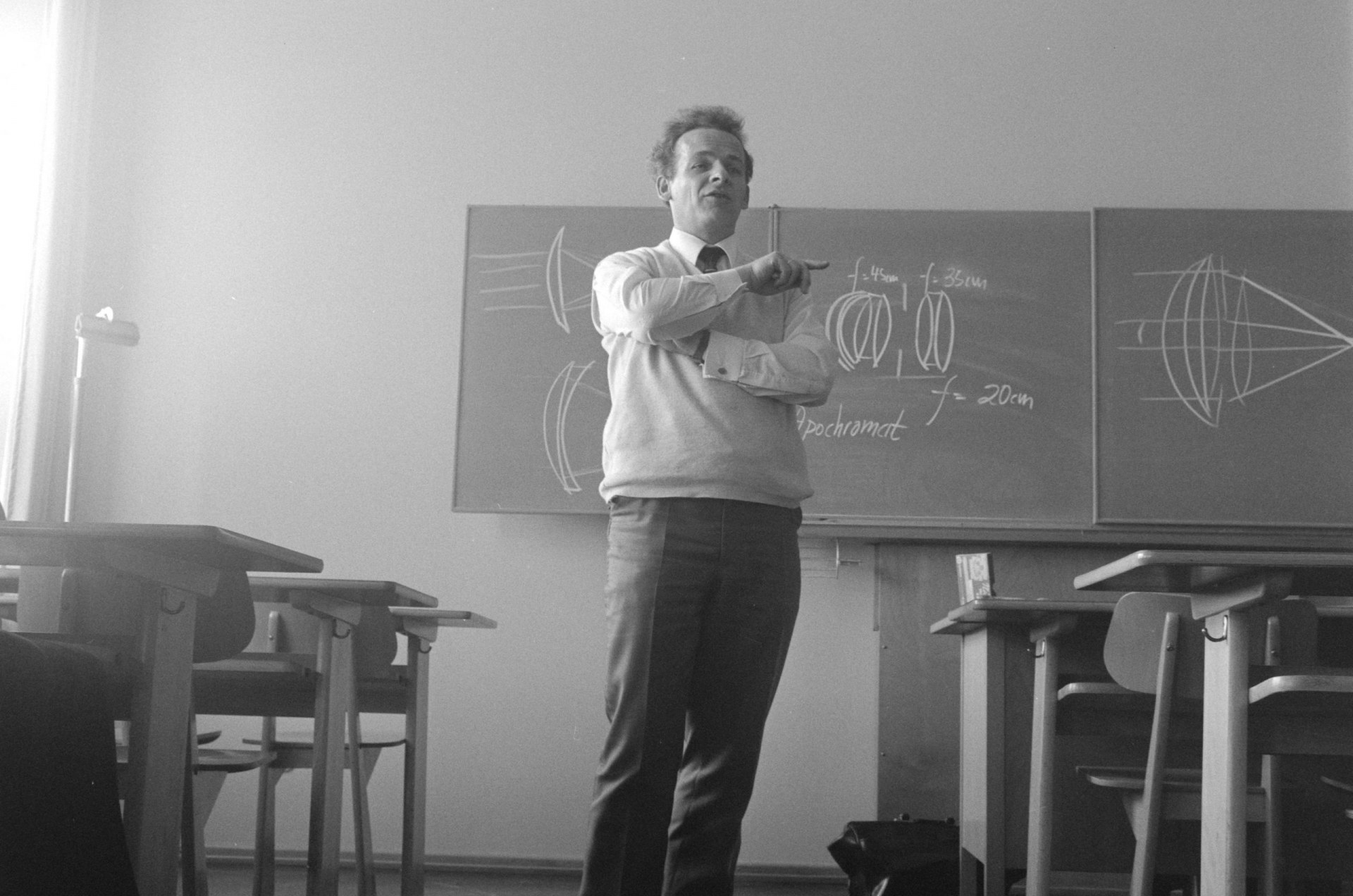 The white fluorescent lights of the modern classroom hurt Harold’s eyes as he walked into his sixth form class after lunch. He placed his leather compendium on the desk, pages fell out either side. He set his tea down next to it and some slopped over the side and onto the plastic desktop.

Harold took off his round-rimmed glasses, rubbed them on his woollen cardigan and surveyed the class. No one had even noticed his arrival. Some boys were listening to music, some were throwing a footy around the class and as usual, in the centre of the room, Jake Stockholm was holding court. Eager groupies gathered around his phone screen. They watched him, eagerly anticipating his reaction and responding with the appropriate reaction to the phone screen’s content.

“Settle down boys. Can you all please take your seats?”

Some boys moved to their seats and the murmur of chatter stilled.

Frustration began to build in Harold’s voice. His stance grew more assertive, his hands moved to his hips, lifting up the edges of his worn cardigan. The majority of the boys took their seat and the footy ball stilled. One boy remained defiant. Even without his audience, Jake continued to stand in the centre of the room and watch his phone. Harold stared at Jake.

The pure audacity of the child, Harold mused. He has no respect! Harold thought back to his own school days and the fear of god that struck him when Mr. Higgins would enter the classroom. Why were kids these days not afraid? Why was it, now, almost the other way around?

“Jake Stockholm, give me that phone and sit down!”

Harold’s roar startled the class and many boys shifted uneasily in their seat and cast their eyes downwards. The blood in Harold’s veins began to heat. Perspiration trickled from the back of his head, down his neck and inside his shirt collar. His hands, clammy now, began to twitch. Jake remained oblivious and laughed at his phone.

Harold’s body exploded across the classroom like a greyhound let out of a trap. He thundered through the desk, knocking books and pens to the ground as he shot forward. He snatched the phone from Jake with his left hand as his right arm raised to the ceiling, just as Jake looked up in horror.

SPLASH! Another car drove by and splashed Harold as he stood in the rain at the side of the road. The wind whipped around him and blew his raincoat hood from his head. His bicycle tyre had burst as he rode out from the school gate towards home. Justice, he thought, and bent down to examine the burst tyre. His hands had not stopped shaking since the incident. He looked at them liked they belonged to someone else as they became tight with the cold. The rain had plastered his hair against his forehead and his trousers, tucked into his bicycle clips, began to give way with the weight of the pooled water. He couldn’t grip the tyre casing and his back ached from bending over. Tear pricked at the side of his eyes.

He couldn’t believe the events that had unfolded that afternoon. Shame was very heavy he discovered as his body slumped to the curb. How would he tell Majorie. He put his shaking hands on his head and sobbed. The salty tears mingled with the raindrops as his body heaved. He had let her down so badly. She would never look at him in the same way again. Another splash from a passing car hit him with a pool of water as he trembled on the curb.

Forty years of teaching had allowed Harold to see a lot of change. He had seen the change in uniform styles, technology and even the diversity of his classroom. Over the years he’d  encountered many tough characters. However Jake Stockholm had been the only one that got to him. The only one that pushed him too far. Jake had lit an anger in Harold that scared him. Harold racked his brain to try and find out why. He examined his hands searching for a reason as to why they had done the unthinkable. His intellect needed to find a meaning for his gross behaviour. But it couldn’t. Harold’s mind was full of a dark fog.

The fog had been coming and going for the past few months but now it seemed to have taken up permanent residence. His normally creative brain was subdued. The images in his mind were duller, the memories now not shining quite as bright as they once had. Harold wiped his soaked face on the inside of his cardigan and zipped his raincoat back up tight to his chin. Even with the dark fog Harold knew he couldn’t sit here forever. He pulled himself up from the curb by the handlebars of his bicycle. He wheeled it alongside him as he dredged home to Marjorie.

Harold sat on the red plastic chairs that lined the corridor wall outside the sixth form classroom. Normally reserved for those children that had misbehaved, they were now reserved for similar adults. Marjorie sat beside him and blew her nose for the second time in as many minutes. Her nervous fidgeting grated on his heart. The harsh white fluorescent lights overhead shone onto the red plastic and the reflection seemed to bore into his eyes like an x-ray machine. Harold winced as the throbbing headache he’d been carrying since the incident intensified.

He was waiting to hear his fate. Summoned to appear before a panel of his peers and parent representatives. They would decide if he was still fit to teach. Still employable, still allowed to be a contributing member of society. Harold shifted uncomfortable in the small chair and wrangled his hands together. He felt sick, his mouth was dry and the absence of food for the past week began to make his body feel weak.  Marjorie instinctively reached out for his hand and gave it a squeeze. Harold’s heart swelled with love but in that instant was replaced by guilt. The dark fog returned and his shame took his hand from hers. His back straightened and he stared straight ahead. He dared not look at Marjorie in case she saw who he really was.

Harold’s dark thoughts were interrupted by the classroom door swinging open. A tall woman talking rapidly on a mobile phone emerged onto the corridor. She balanced a coffee cup and briefcase in one hand and held her phone tightly to her head with the other. She paused briefly and looked at Harold. She then marched down the corridor and continued her rapid instructions down the phone. Following behind her, a stoutly man barged past and thundered down the corridor swinging a briefcase. His face was red and blotchy and he appeared like he had just swallowed something nasty. He looked vaguely familiar, Harold mused, as he stared after the large gentleman.

Harold turned to face the voice that had just spoken. Jake Stockholm stood before him with a tear-stained face. A face very similar to the stoutly gentleman who had just passed him. He shrugged his shoulders almost apologetically and shuffled down the corridor after the two busy individuals.

“Harold, will you come in please?” a voice called from the classroom. Harold took one last look at Marjorie, straightened his tie and walked into the classroom.