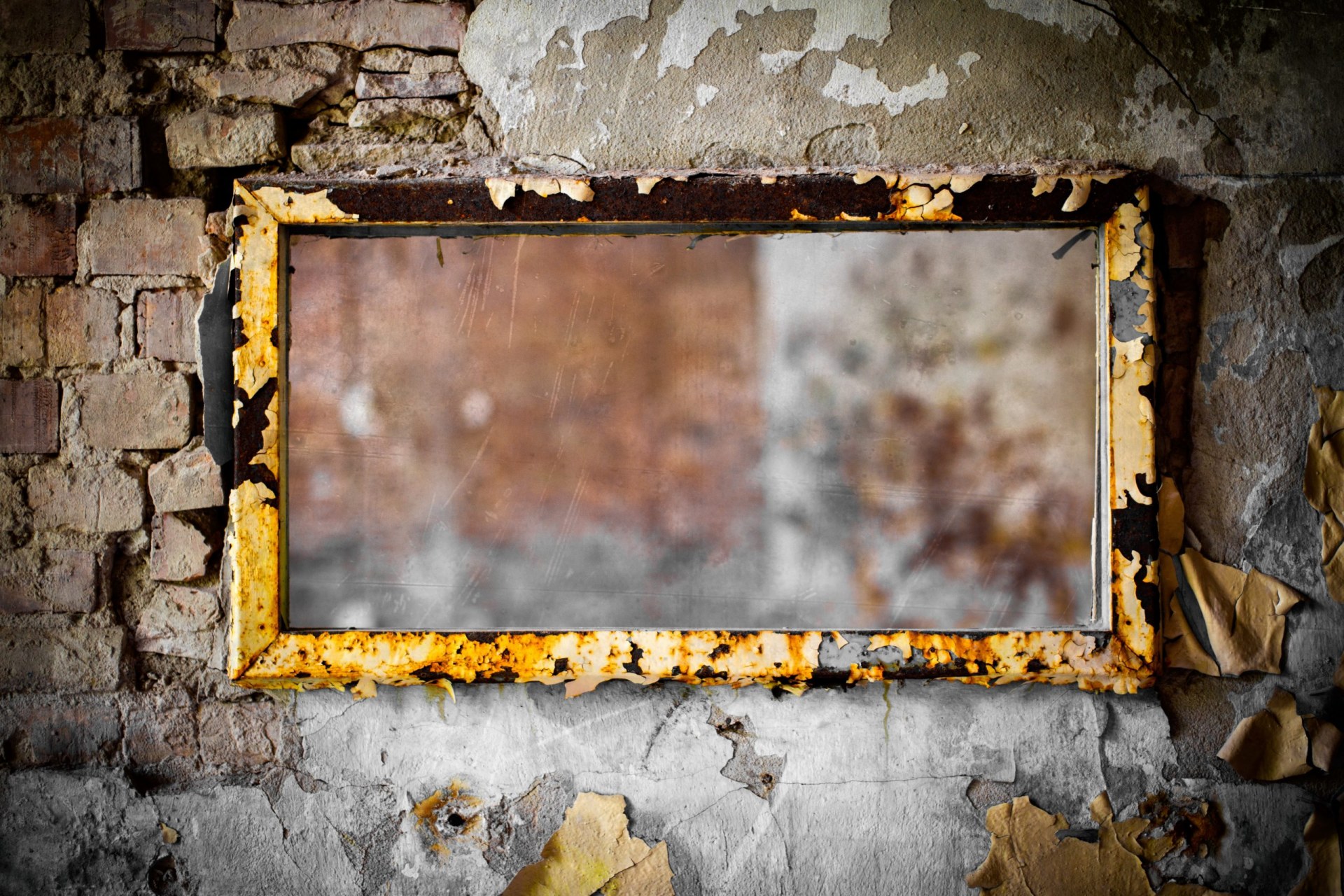 Deedee’s been losing weight. She stands and watches herself in the mirror. Runs her hand down the sides of her nightie and outlines her hourglass shape. I run my hands down my sides and she laughs; tells me I’m chubby but forgives my antics. But why is it okay for me to be chubby? I ask. She laughs again. Because you’re a kid.

She focusses on her reflection for a long time, her head tilted. Mum calls us for dinner but Dee simply yells back that she’s not hungry. You’re crazy, I tell her. Mum’s cooked lasagne. She just shrugs her shoulders and keeps preening.

At the table Dad’s tapping his fingers irately as he calls her again. He and Mum stare at each other, their faces so tight their eyes and mouths are just black lines. It makes them look identical.

I’m sick of this, says Dad, and he stamps up the stairs. He yells at Dee and she screeches back at him like she does every night. Downstairs he just shakes his head at Mum then crams the lasagne into his mouth. He eats so quickly it’s as if, like Dee, he hates food.

After I’ve stacked the dishwasher I wander into Dee’s room. She screams, Get out! and clouts me so hard my ears ring. I fall onto her bed and pretend to be dead, my eyes open and as lifeless as I can get them, even though I don’t like to see her naked body. It’s almost collapsing in on itself. She pulls on her dressing gown to hide her hip bones. They stick out a lot now, like a lion’s, but she’s proud of them.

My head is still sore from her slap.

I ask her if she can make her hips stick out further and she frowns. Her face is a skinny question mark. Because you’re still fat, I say. I’m running out of the room before she can hit me again.

Cherry is waiting for me and she grabs my arms and shakes me hard. Don’t say that to Deedee, she hisses. If Mum hears you, Evie, you’ll be dead.

I tell her I’m just joking but she pinches me and threatens to tell Dad if I say it again.

I march back to our room and glare out the window. You should be able to joke with your sisters, I yell, but Cherry doesn’t answer. She’s probably downstairs dobbing me in.

I’m woken up by Mum banging on Dee’s bedroom. Cherry rolls over and gapes at me, her face as pale as toothpaste, then we both run to the hallway. Dee has locked her door. I don’t want to see the doctor and I don’t want to eat, she yells. Mum looks at Dad with her face screwed up in guilt; her shoulders slump as she starts crying. As Cherry and I hug Mum, Dad wrestles with the door’s lock until it cracks so loudly we all jump then Mum tells us to get ready for school. We pretend to but hover beside Dee’s doorway. Mum is pleading with Dee, but Dee won’t get out of bed. She says she hates the doctor, and if Mum leaves her alone she promises to eat later.

Eventually Mum comes out and slowly closes Dee’s door. Her eyes are as swollen as rosebuds.

Dee is sitting on the bed. She’s tying a measure tape around her waist. Her arms are thin, almost wispy, and she’s shaking. Bruise-blue moons shadow her eyes.

Are you going to die? I whisper. A kid at school told me you are.

Don’t be an idiot, she says as she writes the measurement down in her secret pink book. At least I hope not, she adds.

I am, she says, and smiles so forlornly my heart twists. But every cloud has a silver lining, hasn’t it? She chews on her yellow thumbnail then says brightly, I’ll be slim and perfect, just like a model in a magazine.

I don’t mention that she looks more like the skeletons in ancient cartoons.

Anyway, you’ve gotta go through pain to be beautiful, she says, That’s what Mum always says.

I get home from school and there’s a group of people in our lounge room. It’s the principal from Dee’s school, the doctor and the priest from Nana’s church. Mum hasn’t even given them coffee. They’re all sitting tensely, not moving, like dolls in a waxwork. No one is talking, and the sad-stern grimace on their faces freaks me out.

Just go up to your room now, sweetie, Mum says. I race up the stairs to avoid their ominous murmuring.

In the middle of the night I wake to see Deedee standing over me. She’s gripping her tape-measure and gazing down at me weirdly. I yelp and switch on the light but when I turn back around she’s not there.

Sometimes I sit outside her door and hear her muttering to herself. Maybe she’s praying, making deals with God.

She’s balancing on her stool in front of the mirror. Her nightie is so light I can see her skinny limbs; they’re frail with dark deformed spots. Her breath smells like dead rats and her face is as dry and crumbly as stale bread. It makes her mole and freckles look like mould.

I’m scared, she whispers through her cracked lips. I don’t think I want to die.

I hug her and am shocked by the sharpness of her bones.

You won’t. Promise me you won’t, I whisper back, but she doesn’t seem to hear me. She’s staring in the mirror, running her finger around her jutting jaw.

I’m still so hungry, she says.

I can give you my Easter egg.

No, she sighs. I don’t think I could eat it. I can’t bear the thought of eating anything. I know I’ll be sick.

It’s the most she’s said to me in weeks. I nod dumbly, hoping to keep her talking.

But I’m getting more beautiful, aren’t I? she says.

Well…I start, but she looks at me so anxiously I agree with her. I try to laugh. See? There is a silver lining to starving yourself, I say.

Mum’s anger burns up the bedroom as she tries to drag Dee out. Dee clings onto her sheets, screaming. Dad finally races up the stairs and pulls Mum away and Dee falls back onto the mattress. I can see Mum’s finger marks on her arm; blue-black imprints, like fuzzy tattoos. Dad half-carries Mum downstairs.

I get home from school and sneak into Dee’s room. She’s trying to yank out a tube that’s up her nose while Mum tries to wrestle it back in. After a time Mum gives up and storms out.

I’m so cold, Dee tells me. Her hair is so threadbare I can see her blotchy skull. I wrap a blanket around her; she clutches at it with her dusty fingertips. She keeps shivering. Her breath – a mixture of vomit and the decaying magpie I found last month – is strong today. I scrunch my nose.

How can you keep throwing up? I ask her. Isn’t your belly empty? She just smiles a half-smile through the thick hair that’s sprouting around her mouth and up her cheeks. I suddenly feel ill.

You should eat, I say weakly as I pull away from her.

You look bad, I say.

She screams at me to get out of her room and I fear her bones will splinter through her gauzy skin. The cuts on her arm are getting deeper, too.

I can’t stop myself.

You’re crazy, I say. Mum’s right. You looked better when you were fat. Now you look like a zombie.

She repeats it over and over and rocks herself back and forwards, then gets out of bed and weighs herself for the hundredth time, mumbling and moaning. She lays down on the carpet and tries to do sit ups, but her ribs sound like they’re snapping and she wilts badly. She rolls on her side and throws up a bit. Mum suddenly marches in and hauls me out and yells in a savage whisper that I’m making it worse, that I should just shut up, and I want to tell her that I’m trying to fix Deedee, make her realise how silly she is, but Mum isn’t listening as she heads back to Dee’s bedroom while ranting back at me. I curl up in a ball and think of last Christmas when Dee ate a huge slice of plum pudding then threw it all up.

Dee is just a carcass now. Dad carries her down the stairs – he looks terrified as he tells her she’s as light as a feather – and they drive her to hospital. The next day Mum and Cherry scrub her bedroom to clear the smell of bile. They change the sheets again, open the windows, then light some candles.

Maybe I should go on a diet too, I say, joking.

Mum bursts into tears. Don’t say that, she cries, just don’t. She grabs me and I think she’s going to hit me but she squeezes me hard. Don’t, please don’t, she says.

It feels like a whole season has passed when Dee returns home. She can’t get out of the stretcher, and has to be carried into her bed. A nurse gently inserts the tube up her nose and takes her blood pressure; she frowns, seems to hesitate for a minute, and leaves.

I can’t talk, I don’t know what to say. Dee’s shell is almost see-through; with the pillows puffed up behind her she’s as mysterious and terrifying as an exhausted fairy. Her skin is fading and her jaw bone, knees and ankles bulge out at weird angles.

I wanted to come home, she says, her voice croaky. I didn’t want to stay there forever. She’s breathing so hard I can barely understand her. I hold her hand and her knuckles are like little claws. Get the mirror, she says. I hesitate – Mum’s ordered me to keep it hidden – but Dee’s eyes are so like shiny black saucers that I hold up my small one for her.

At the funeral I think it’s strange that the mourners gobble down the cakes and biscuits while they speak of Deedee. Mum eats nothing, and Nana just drinks. Eventually Cherry and I head outside and sit on a swing and I remember when Dee had climbed onto this same swing just six months ago and she was so thin even then that I thought she would float away into the clouds.

I guess she has now. And is hopefully wearing her silver lining.

on A Thin Silver Lining.