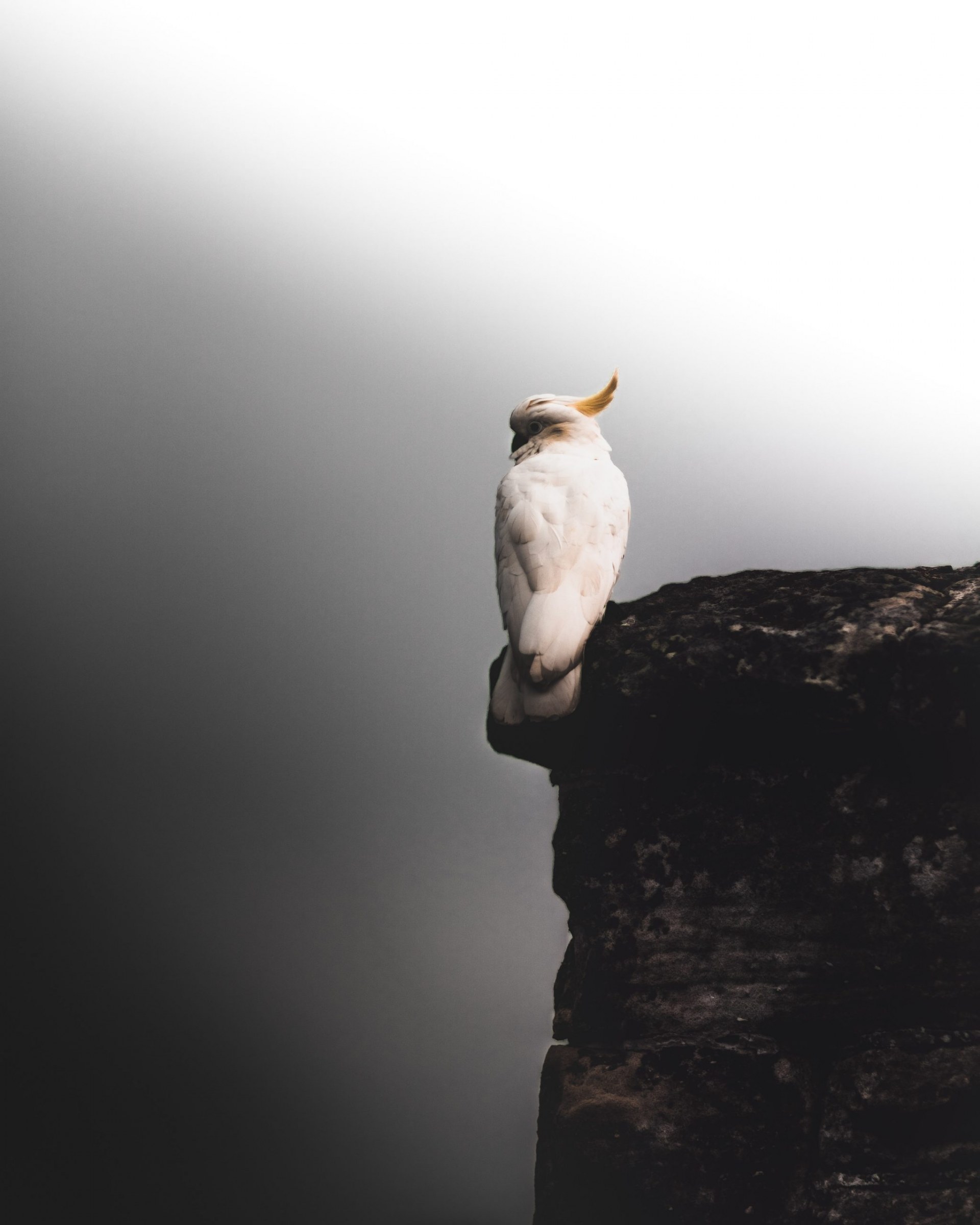 Summer must be the red of a bushfire-shrouded sun, no question. Autumn is surely gold, the colour of the leaves the tree near the letter box sheds at that time of year. When I rake the leaves in spring the grass underneath is a verdant green – so springtime is green. Winter? I look at the cockatoos on the fence for inspiration and decide that winter is the season of white.

At night, when I switch off the heater, the cold comes in. It creeps past the image of the Madonna and Child so quietly that it affirms my faith in winter being a season of silence.

Next morning my beliefs are shattered by the crunch of frost underfoot on the once springtime-green grass. The windscreen wipers screech in protest at being dragged across the ice. They sound like cockatoos.

The sun had just dipped beneath the ridgeline of the roof, and with it, Henry’s last chance of using the glare as an excuse.

He reluctantly bent down to start the chainsaw but stopped and instead regarded the giant Jacaranda in front of him. He sighed and patted the trunk as though slapping an old friend on the back. He ran his hands across the rough bark and felt its strength, its solidity, its belief in its own indestructibility. Henry felt sick to the stomach.

The tree had grown along with the family that occupied the house it now overshadowed. Right from that first November, when he and Jane had a backyard picnic under its branches, it had been part of their lives. Henry swore that Kelly was conceived not long after Jane had drained the last few drops from the bottle of Verve Clicquot.

The kids had used the trunk as a cricket wicket, a football goal, a bar in games of chasings. Halloween pumpkins had been draped over its branches as had Christmas lights. It was a favourite at birthday parties and many a daring child had climbed the lower branches and swung from them.

The branch that crashed through the conservatory roof during the April storms was bad enough; but the neighbours’ $6,000 plumbing bill caused by the roots had been the last straw.

The letter from the council confirmed what he suspected must happen.

Henry rubbed at the knot in his stomach and put his foot on the chainsaw and pulled the cord. Part of him hoped it wouldn’t start but it sputtered into life in a shroud of blue smoke.

He made sure the safety catch was on and mounted the ladder. A wind gust blew at the branches and showered him with purple petals. The beauty of it made him hesitate but he couldn’t put if off any longer. Holding the chainsaw in one hand he pulled the goggles over his eyes as though it were an executioner’s mask. Henry was glad of the goggles since it hid the tears that had welled up. He revved the motor. A cockatoo sitting on a branch shrieked and flew off over the roof towards the sun.

Thanks for cutting me off you prick, I shout into the interior of my car. Ahead of me a thousand brake lights come in the afternoon peak hour traffic. Ha, ha, fat lot of good that did ya, mate. I smirk at the white Honda driver beating his steering wheel in frustration.

To take my mind off the frozen traffic I look up at a gaggle of cockatoos perched on the electricity wires.

They are anything but still. Some are preening themselves, others are hopping about; one is walking with a swagger like a tightrope walker.

The backdrop to their high-wire act is a bruised peach of a sky, the purple edges hinting at the coming storm.

Another mob of cockatoos land on the wire sending the others half-spinning and clambering to hold on.

One of the cockatoos, I think it’s the one with the swagger, loses its grip, flies in a tight circle and catches a hold of another wire with a claw, squawking as if to say Look at my aerobatic skills, see if you can do that ya bastards. It swings around like a monkey and stretches out a wing-tip.

A smoking cockatoo lands with a thud on the white Honda’s bonnet.

She left by the front door

She had danced here once. It was on a balmy New Year’s Eve. She would sway and move in a way that looked like she was floating. You could swear her feet weren’t touching the floor. And the way she used to laugh! It was so infectious you couldn’t help but laugh with her. Back then the room was packed with family and friends. Children running and laughing as their cherished aunty chased after them.

The room itself was perfection. Furniture painted by hand and with love. Homemade curtains in hues of yellow and orange like the citrus that grew on the trees in the backyard. Flowers from the garden in vases made at pottery classes that she had taken when the kids were older. On the wall was a childlike painting of a sulphur-crested cockatoo that everyone told her was good. On the mantlepiece were photographs arranged like stills to a movie of a family growing up. Those children now had children of their own.

And now, after the phone call, all those children and grandchildren are here.

And we are all in that room again. So many of us it’s hard to breathe. The family have travelled from far-flung suburbs to be here. There’s Mick and Linda and Tess and Daisy and Matthew and Gina and others.

We stand in silence although we can hear sniffling – it sounds as if the room itself might be weeping.

We form a queue and shuffle past, each one of us placing a kiss on her cheek. She is cold and pale but free from pain.

Six of us lift the casket and we stagger for a moment under the weight. We straighten. And now she is moving across the room again, her feet not touching the floor. She sways as we negotiate the bend at the end of the hallway.

– We could go through the garage, it might be easier.

– What about the back?

She left by the front door.

Dedicated to my sister-in-law, Effie, who passed away after a long battle with cancer in 2015. Released from hospital she spent her last few weeks in a bed set up in the family room of her house. On the evening she died about 50 relatives crowded into the room to pay their respects.