The Moving Pen | People Not People 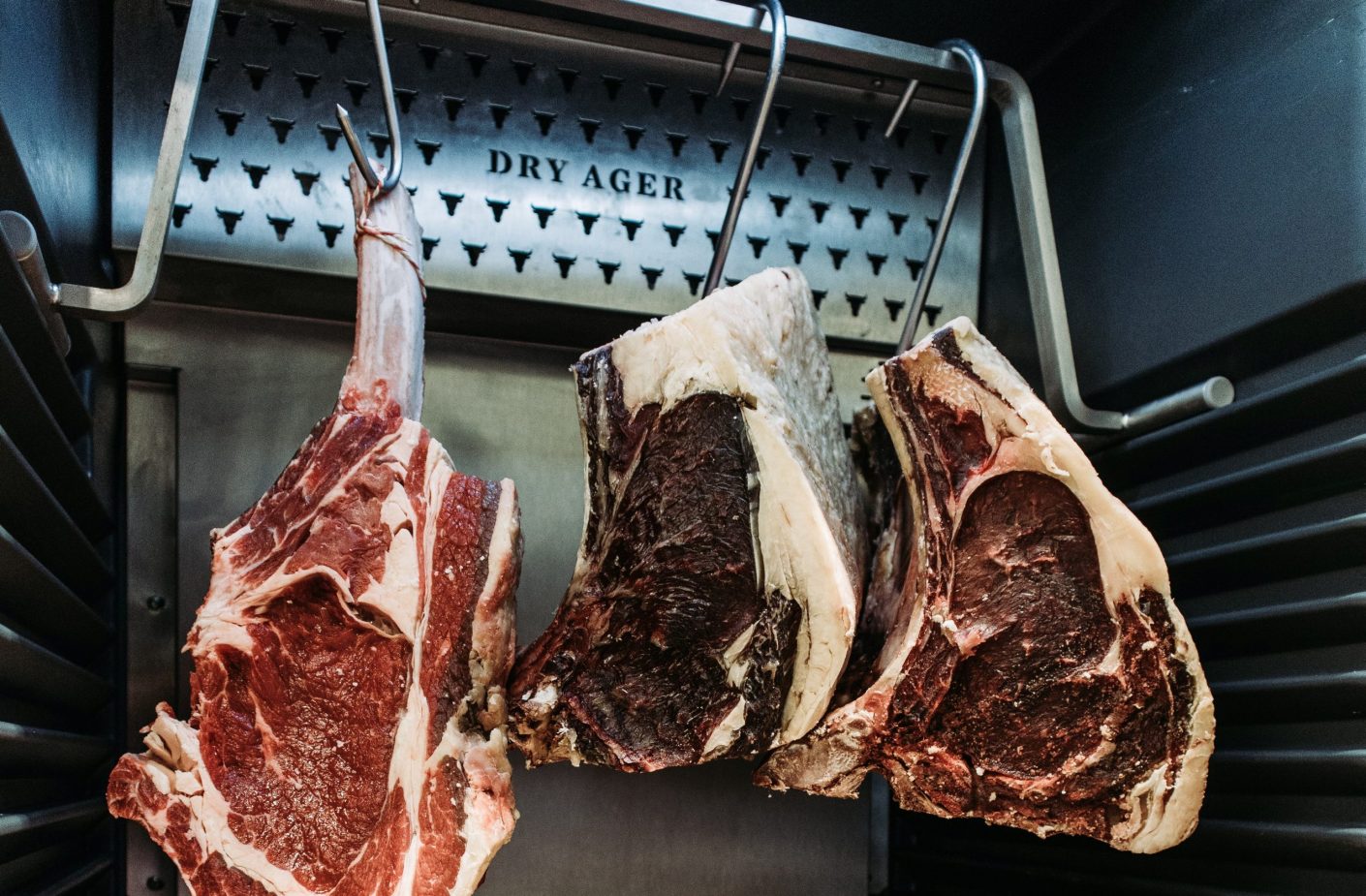 ‘You’ll need this, Inspector,’ said the officer manning the door to the freezer room. He handed the Inspector a heavy padded jacket, a pair of thick gloves and a pair of overalls. Detective Inspector Mike Dresben took off his coat and hung it next to others and stepped awkwardly into the overalls.

When he was fully dressed the police officer offered him a plastic bag.

The policeman nodded grimly. ‘It’s pretty grizzly in there.’

The officer pushed open the weighted door to the freezer room. Mick felt the blast of icy air scrape his cheeks and pulled the hood of his jacket over his head. Through the cloud of his exhalations he saw the rows of ice-blanched cattle carcasses hanging motionless and ghost-like on steel hooks from racks above. The surface of each was hairless and white, rimmed with a freeze-dried vermilion about its chalky ribs.

‘You might want to take a breath when you get here,’ said Terry. Mike followed the voice to a clearing in the room where two navy clad figures stood like Michelin men in freezer gear.  The taller one stepped forward.  Mike peered into the shadow of the man’s hood and made out Terry’s face.

‘This is Sergeant Veronica Smith,’ said his colleague. The other navy blob stepped forward with an outstretched arm and they fumbled a gloved handshake.

Terry and the sergeant stepped aside to reveal the crime scene.

A body lay on the floor, frozen stiff, its head riven, no doubt by the axe that lay next to it. A smeared and frozen path of purple blood snaked back into the room, the same colour as on the hung beef.

‘Damn,’ said Mike, and bent down over the corpse. He said, ‘Guy on the door said it was grizzly, but I’ve seen worse.’

‘You’ll need to look up,’ said the sergeant.  Mike rose and peered into the racks of meat.

‘Oh Jesus,’ he said, and turned away. Bile rose in his stomach. He might need the bag after all.

‘They’re naked, Terry.’  There were three more victims, naked, with skin of the same waxen colourlessness as the beef, each with the same axe wound, their toes striving for the floor below them.

‘No one does,’ said Terry. The three of them moved aside.

‘So, what, we disturbed the guy – I assume it was a guy – about to hang the fourth?’ said Mike.

‘Yep,’ said Terry. ‘He turned down the temperature to max low – it’s minus thirty in here – which caught the eye of the operator.  He went to inspect the fault, and saw the perp in flagrante. And when I say in flagrante, I mean in flagrante.’

‘How is he after witnessing that?’

‘You can imagine,’ said Terry

‘One of the workers here. Knows the system, had access to the tools,’ said Terry.

‘I didn’t need to see this,’ said Mike with a sour grimace. ‘How soon can we get it cleaned up?’

‘When the photos are done,’ said the sergeant. ‘The cold is affecting the cameras.’

Outside, as they stood in sun shedding their thermal overwear, Terry said, ‘You look a bit jaundiced, my friend.’

Mike and Terry at a small desk facing the accused. Two police guards stood behind him in the bland beige room; a third stood behind the officers, his back to the glass of the one-way mirror. The prisoner was shackled.

Mike glared at the man, at his wiry build, and unkempt hair. Terry had pressed the recording button and had gone through the preliminaries.  In many ways the interview was a formality: the guy had confessed, been caught in the act, had prints all over the place and mountains of evidence outside the freezer room all pointed to guilt.

What beleaguered Mike so much was why.

He stared into the man’s eyes.

It was as if the man had no pupils. There was just a hint of pale blue in the centre of each ice white eyeball. They were as cold and devoid of life as the freezer room itself. Mike leaned forward, in the hope, he realised, of seeing some skerrick, some mote, of humanity inside the man’s gaze. But no, there was nothing. Not even an absence, thought Mike, if that’s possible. It’s like he’s frozen everything down to absolute zero. Zero Kelvin.

‘What are you staring at?’ said the man.

Terry said, ‘Tell us why you did it.’

The man smiled, and Mike felt a chill insinuate itself into his spine. He shivered.

‘So you take it upon yourself to kill them,’ said Terry.

‘Well, I don’t actually know if the first one was,’ said the man. ‘He was just my practice run to get the process right, you know what I mean?’

‘No we don’t know what you mean,’ said Mike, ‘and the fourth person, the one on the floor?’

Mike felt his heart clench with the coldness of the response. He said,

‘Yet it’s okay to, you know, perform sex acts on them, but not okay to be gay.’

The man sniggered and said with a manic grin,

Mike’s stomach froze at the bluntness of the reply. He was becoming an ice man himself, and he wondered if this was how the man ensnared his victims, by freezing them psychologically first, to make his attack easier.

Mike sighed, and heard Terry doing the same. He thought he saw a cloud of exhalation appear, a wet warmth condensing to a frost.

‘You guys have what you need?’ the man said.

Day’s end, and Mike pushed his front door open. Two fluffy caboodles came skidding down the hall barking and yapping and jumping up to greet him. They covered his outstretched hand in eager doggy licks.

‘Hi dad!’ A joint and jubilant pair of voices.

A tail beat on his leg and paws scratched his shin.

‘Hi darling,’ his wife said, with a peck on the cheek. ‘Did you pick up milk?’

He stood in the hall, shivering, dazed.

She looked at him.

He shrugged and said, ‘Work.’

She encircled him with her arms and squeezed him close, and held him for a long moment. He felt the ice thaw in the warmth of her body and the clamour of the house and the scrape of dogs’ nails on the floorboards and the scent of food cooking. He hugged his wife back, and closed his eyes as he let the life in him return and he became less rigid. Her breath was hot on his neck and he quashed the temptation to tears. Then with her hands holding his face she kissed him. Her mouth was sweet and alive and warm and reassuring. A child’s voice said,

And he knew, this, this is when people are people.