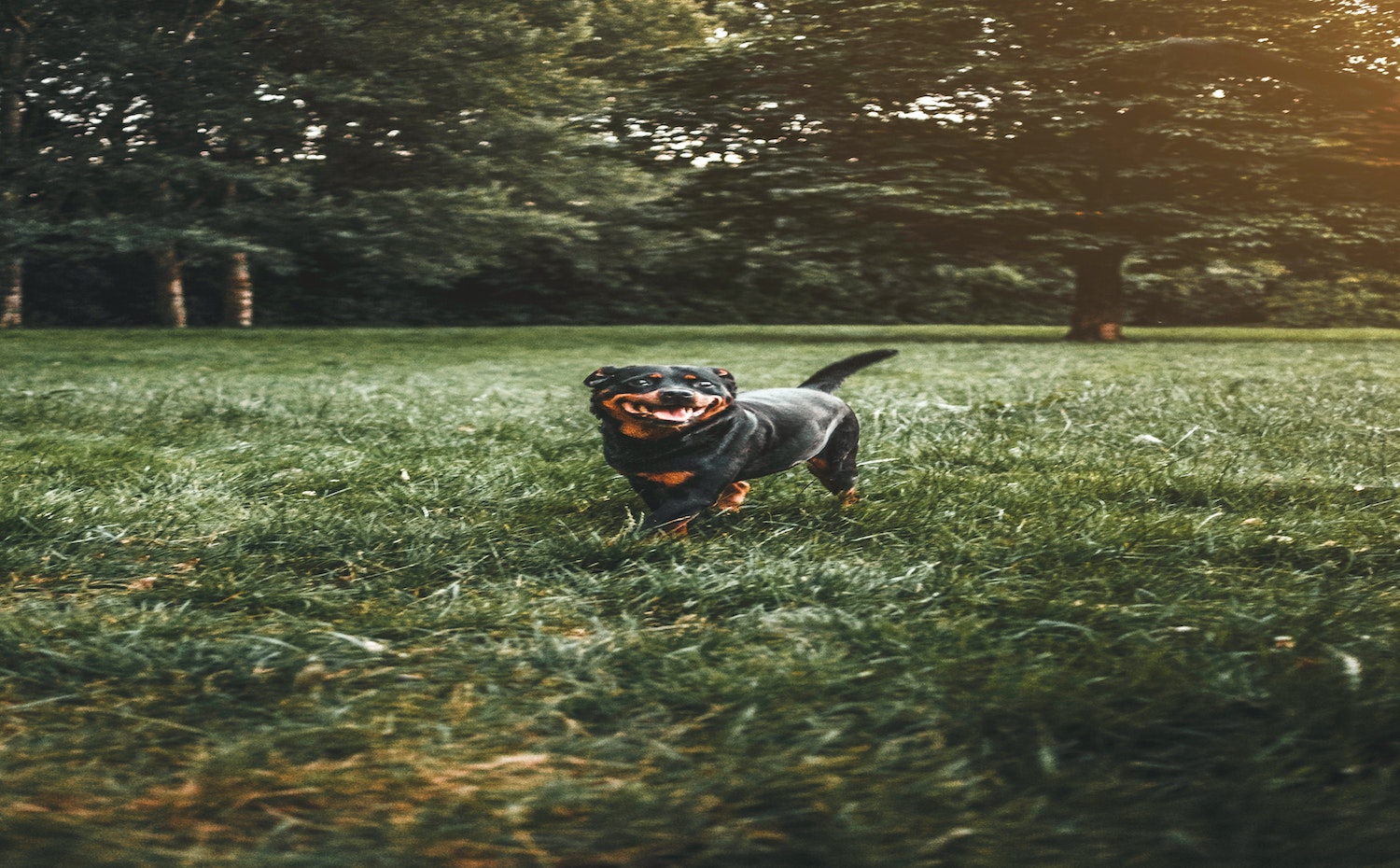 Days and days and days and days have passed – years really – and yet people still look at him strangely when he defends the old lady and her dogs. He won’t let anyone laugh at her. He helps her now; he always will. But even the cops who keep searching his place raise their eyebrows.

Dino’s bone is high in the air, twirling, but it doesn’t fly into the lake. The rottweiler catches it, brings it back to him covered in drool and dirt, and he rolls with her as he tries to drag it from her smeary teeth, sharp as yellowed knives. He knows the dog won’t harm him; he knows he’s safe, despite the huge paws and her sinewy smell of danger. It’s bizarre but only when he plays with her or the other rotties does he feel unhampered by threat. They alone understand him. They alone empathise.

The wind is wild today, temperamental despite the genial spring sky, making Dino and the other hounds jumpier, moody; they never like sporadic squalls.

His brother calls from their backyard, just next door. It’s late in the afternoon, the Cup will start soon so the bank will be empty. He knows it’s time to go. But he won’t leave without checking that all is well here. He quickly does what he’s been doing since he was just a boy: feeding the dogs, filling their water, tidying the kennels in the large cage, and of course calling a goodbye to Mrs Flint. Ensuring that she’s okay, as she once did for him.

But she doesn’t answer. Eventually he finds her roaming around their co-owned back area at the lake’s edge, where they keep their chicken pen and boats and the decimated skeletons of a dozen ageing cars. Under the jacaranda she stands, tottering, her ancient dress as blue-violet as the blossoms falling.

Calum sighs. This has been happening now for a few months. Your hubbie’s gone, Mrs F, he says softly. For a moment she looks alarmed, lost; he quickly places his arm around her shoulder until her eyes unfog.

– Calum, she says, and starts to cry.

– It’s okay, come inside. He seats her in the kitchen, makes her a cup of builder’s tea, the kind she likes. She’s smiling now, thanking him and chattering on, normal again.

– Now listen, he says when she stops to take a breath, the dogs are a bit wild today. The wind, you know. Prob’ly best to leave them be. Don’t go in the cage. All right?

She nods, and smiles, and sips her tea.

His brother Axel has hidden the shotguns in an old blanket in the back of the van, but Calum, as is his habit, can’t stop fondling his pistol under his jacket. The masks are ready – savage and frightening monsters destined to scare even the bravest bank teller. But Calum’s mind won’t stay on the job; he should have locked the door to the dogs’ cage. Mrs Flint seemed further adrift than usual, and he doesn’t want her letting them escape.

Jacko speeds the van through a set of red lights.

– We’re gonna be late, says Jacko. Cause of you and that potty old lady and those bloody dogs.

Calum pulls out his pistol and whacks Jacko on the shoulder, not too hard as he’s driving, then hides the gun again. For a moment the van veers, then Jacko steadies it, glaring at Calum and cursing colourfully under his breath.

It’s galling that his brothers still don’t comprehend. He’s been helping Mrs F with the dogs since he was six years old, since saving her drowning puppy in the lake. Her house next door was so different to his: neither Mrs F nor her husband ever belted or abused him; they were always full of thanks, and praise, feeding him biscuits and home-cooked lamingtons and wiping salve on the florid burns from his father’s whip. He’d read a word once – gracious – that best described her. And over the years, especially after Mr Flint’s death, she’s been quietly declining, like a fading shadow, and he has been there for her. No one else has. Sure, her sister comes occasionally to probe, but Nora Flint hates Calum’s family so much – all Mrs F’s neighbours in fact – that she rarely visits. (He enjoyed puncturing her car tyres one night, just to teach her a lesson.) So he now attends Mrs Flint like he does the dogs: checking the food, water, the house’s cleanliness. Her unassuming words still pacify him, lull him; sometimes he believes he’s a canine, needing nothing more than to be patted by her benevolence and love.

The rottweilers, too, are his best friends. Even if one bites him he would never hurt it. Amazing to watch, those ink and mahogany hounds, their hides as tarnished as burnt corks, as they gallop and bark and saunter, forever dynamic, like their temper. He’s more akin to them than his brothers; he’s certainly more at peace with them. Than with anyone.

– We’re here, says Axel. Masks on. Calum cracks out of his reverie and stores his memories away deep. His cells and veins are tingling, galvanised. He snaps the pistol.

Much later that afternoon the brothers drive home, laughing and shouting. Calum is wiping blood from his hair and arms as Jacko snorts, I can’t believe you, Cal. You are one crazy motherfucker. I swear. He’s gulping vodka straight from a bottle in the back seat, sharing it with Axel, who’s gripping the money bags so tight his knuckles look mummified. They keep retelling the day’s events. The emptiness of the bank (the townies were at home or in the pub today, leaning into the telly, hugging their betting forms, engrossed by the Cup). The fear on the few tellers’ and customers’ faces (all their eyes hollow and glassy, their mouths frozen; always the same). The pretty clerk he enjoyed in the manager’s office (he’d shoved her undies hard in her jaw to shut her up). That predictable wannabe hero, clumsily trying to press the alarm, who Calum calmly (satisfyingly) shot in the hand, then the leg (which resulted in such a blood-spattering of his jeans that he smashed the guy’s head with his shotgun butt). The ease, yet again, with which the money was docilely handed to them – not at all like on tv or at the movies – and which never stopped him firing a few extra bullets (their fear, tangible as rotting fish, was worth it).

Yes, he thinks comfortably, today was definitely their best yet.

As they finally reach their neighbourhood Calum is relaxing, coasting away. Soon they’ll have a beer, then he’ll feed the dogs for Mrs F and probably share a drink with her, too.

Jacko is fretting out loud, as usual. Cal tells him to shut up, he wishes he’d killed that silly hero. Secretly he does worry slightly that if the idiot dies then yes, he might be up for murder – again. But that’s if they find him, if they detect who the thieves were. But he reviews the job once more: he was careful, very careful. Not much chance we’ll get caught, he thinks, and closes his eyes.
As they pull into their street Axel says, Well that’s fucking weird.

Calum’s chest contorts – through the wire fence he can see that the cage’s door is wide open, and the kennels are empty. The barking is noisy and near though, and as the van slows he leaps out and glances around nervously.

Two of the dogs are in the chicken coop: they’ve caught a hen and are tearing it apart, fighting at each other, covered in fluffy scarlet feathers and bluish globs of flesh. Other chooks are squawking and springing as they try to escape, their wings broken, legs and breasts slashed. The rottweilers, their snouts bloodied and drawn, are delirious.

Jacko swears at Calum and runs into the coop but the rotties turn on him and he backs out quickly, slamming the brittle chain-mesh gate. Those fucking dogs have killed all our chickens! he yells. Calum approaches the coop but halts suddenly; he’s heard a moaning, a soft inhuman keen, coming from inside Mrs Flint’s house. He jumps the fence and treads up the concrete steps warily. Axel is standing near the fence, cocking his rifle, his face cobwebbed with dread.

On the loungeroom floor lies the old lady. Blood leaks from her mouth and her eyes are wide with pain, soggy and apologetic.

No no no no no; this cannot be.

Dino has her arm between her teeth, dragging it at a sickening angle, and Calum watches Mrs Flint’s bone snap between the dog’s jaws.

As Calum runs to the dog it snarls, its ears flat and lips rancid, its eyes a bottomless black, and leaps at him. Dino’s fangs clamp on his neck and he hears the faraway boom of the shotgun, and stiffens, as he and Dino enfold in a final embrace.