The Moving Pen | The Shame of Albert Danton 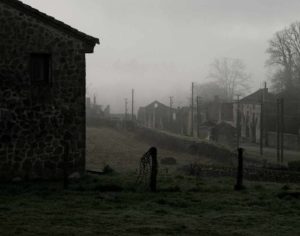 The Shame of Albert Danton

Please, he says, as sternly as possible. A bit too sternly though: he hasn’t used that tone for years. He flinches, softens his voice. Please Dru, come here. But the boy continues to run, he wants to play with the other children.

Albert stands alone under the ghostly eucalypt, hoping he’s hidden behind its lush branches. The mothers across the park are yapping loudly, as always, laughing in screeches. He looks longingly for a bench far away from them, but like all parks in this city there are few seats, and none that would protect him from the searing heat.

Searing heat…yes, summer was fiery sometimes in Oradour-sur-Glane, but even then it was never as scalding as these days in Sydney. And never did flies buzz at him, at his mouth, so ferociously. For a moment he’s awash with the memory of Julys in the village, the way the air would wrap around him like a woman. But that was long ago. Twenty years since he’d left France. Its endless sky and breezy horizon were musky, opulent, but the final hours of his life there were not.

Dru! he calls again. The boy stops climbing the slide, peers glumly at his father. Makes a peace sign: his request for just two more minutes. Albert shrugs his shoulders, resigned. Remembers a similar incident in a farmyard when he disobeyed his Papa, kept playing on his grandfather’s ancient swing. The pain in his buttocks from the whipping prevented him riding the swing for a week.

He doesn’t know the park, doesn’t know the women scrutinising him; if only Matilde hadn’t been ill today. One woman raises her hand to wave him over. He pretends not to see her, stares at the cockatoos flying over. They flap their wings, cawing like angry angels. When he glances back the woman is heading towards him, smiling broadly, her arms wide. He clenches his fists, nods sharply.

Mr Danton, she says, you’re Dru’s dad, right? He’s told us all about you. You come from France – (he still can’t bear these Australians’ twangy pronunciation of his homeland) – right?

I was born there, yes.

I’ve never been but I’d love to go. A friend of mine just adored Paris. Is that where you’re from?

No. I’m from the south. A village.

A village! Her eyes narrow, her nose appears pinched; she seems disconcerted. As usual, the conversation flags, until she asks the customary tired question. Um – how long have you been here?

Oh, you’re almost a true Aussie then. There’s relief in her voice. Such a shame your wife’s sick today! But listen, why don’t you come over with us? We’ve got some tea and cake, and my boys love playing with Dru. He’s such a sweetie!

Her head’s on the side as she beams, waiting for his reply. He knows men are never in the park on a school day – they’re at work, and it’s a mother’s job to raise the children – so no doubt the women are beguiled by him; he’s a variation to their days of infants and repetition. He dislikes their beehive haircuts, their thick eyeliner and mascara; and of course their mini-skirts. When he left France after the war no one dressed this indecently. He wonders if les dames have changed, or if only in this outspoken country have women become so immoral; perhaps he should read his wife’s magazines. Again he’s amazed at how different the sixties are from the war years.

He walks with her to the group. They all have sunglasses, some wear hats, and a few hold their freckly hands above their eyes. Even at four o’clock that sun refuses to yield.

Hot, isn’t it love, says an older woman who he assumes is a grandmother. They’ve all introduced themselves but he had difficulty grasping names as they spoke over each other, constantly interrupting, making jokes that he fails to comprehend. He smiles and blinks softly, pulls out his handkerchief to wipe his forehead. He needs to remove his fedora and cool his sweaty scalp, but that would only expose him more to these pushy women and their confusing comments.

Is it this hot in France? says the grandmother.

Well we’re near the beach, too. I s’pose you don’t have that.

Albert scans the dry grass, remembers a trip to Juan-les-Pins before the war. The rich, cognac-dark Mediterranean, the stony beach. The water constant, like a bath, rarely as mercurial as the fickle sea here.

Well, there are beaches. But not like yours. The women are quiet, watching him politely. I fear we have too many seasons in Europe. Sydney is one long summer.

The women laugh, relax. Oh, but it’s freezing here in winter! says one.

Ah, but there’s no snow. And you have these evergreens. Nothing deciduous.

What? says the grandmother.

He means the trees lose their leaves over there, Hazel.

They all murmur agreement, praising the gum trees. He can feel another discussion about snakes and spiders threatening, boasts about Australia’s reptiles, its deadly insects. He sighs inwardly; stops listening.

Were you in the war?

Albert starts. The woman asking him is a dusty blonde with a tight knotted shirt and snug shorts. She looks like the rest around here – suburban, ignorant. The others fall silent, gaze at each other nervously.

Ignore Betty, says Hazel. She pats him on the arm. We know you Europeans don’t like to talk about it. Neither do we. Such a dreadful thing. My Freddy was in New Guinea, lost an arm. Bloody Japs. And the Krauts were just as bad.

He hesitates; begins his standard line. Yes, it was terrible. But in my village we were hardly affected. The Germans came nowhere near us.

But wasn’t the south of France in the – what’s it called – Vichy area? Wasn’t it occupied by the Nazis?

He takes a breath. No, no, not where we were. He’s confused: in the years since he’s been here he’s largely avoided talking of the war, and has been relieved at the lack of understanding in this country of its true impact on France, on his home. Yes, they all know the broad story, but he’s carefully avoided meeting anyone with the depth of knowledge to understand the complexity, the greyness, of what happened.

I mean, he says, yes, all of France was, well, affected, but my village was…too small for the Germans to care about. In fact, we were happy. Content. It really didn’t affect us much at all.

Betty cocks her head, and starts to speak. Albert exhales loudly, widens his palms dramatically. Anyway, he interrupts, where is my boy? It’s time to leave. Nice to meet you ladies today.

But Betty grabs his forearm. He’s flummoxed. Mr Danton, I know it’s not…done…but I’d really like to talk to you about the war, its impact. I’ve read some books – just basic ones – about how the French – well – collaborated with the Nazis in the south. The Vichy regime, yeah? Just to stay alive I guess. But this really got me thinking. I mean, how could you not be affected by it? Even in a tiny village? You were so close, yeah?

Her irises are so blue, so penetrating, he’s reminded instantly of SS Obersturmführer Schmidt. The Nazi officer had always held his gaze like that, and Albert feels the old fear, and the shame, the never-ending, gnawing shame, creep along his spine. A fear that, for two decades, has visited him almost nightly in this faraway place; a place so different to his homeland after its six years of war that he’s sometimes certain he’s on another planet.

He turns and desperately calls for his son. The sunlight instantly pierces his eyes and he feels dizzy, the empty sky spins, so much so that the playground swings are fuzzy and for a second the children disappear. All he can see are the village men hanging from the branches, their necks crooked, their feet shaking spasmodically before stopping, then simply dangling, swaying in the light wind. He doesn’t hear a woman asking if he’s all right; he hears Schmidt murmuring Good, good, go on, his breath hot in Albert’s ear, the knife being twisted into the table, its shrill scraping like nails on a blackboard, as he, Albert, gave him the resistance fighter’s name. Schmidt then tossed some francs on the table. That wasn’t too hard, was it? he said. Serves that gypsy filth right for stealing your hens, eh?

Albert falls to his knees and the women gasp. One hands him a teacup filled with soda water. He swallows it, thanks the women – they all look the same to him now – and apologises quickly. The sun, the sun, he says. The women nod, relieved, and help him up. Only the one called Betty is watching him closely, holding her daughter tight. He yells at Dru who is standing beside the swings, his hand protecting his eyes as he stares at Albert, not moving. Albert knows his son has never seen him so weak; he thanks God for the sun being murderous.