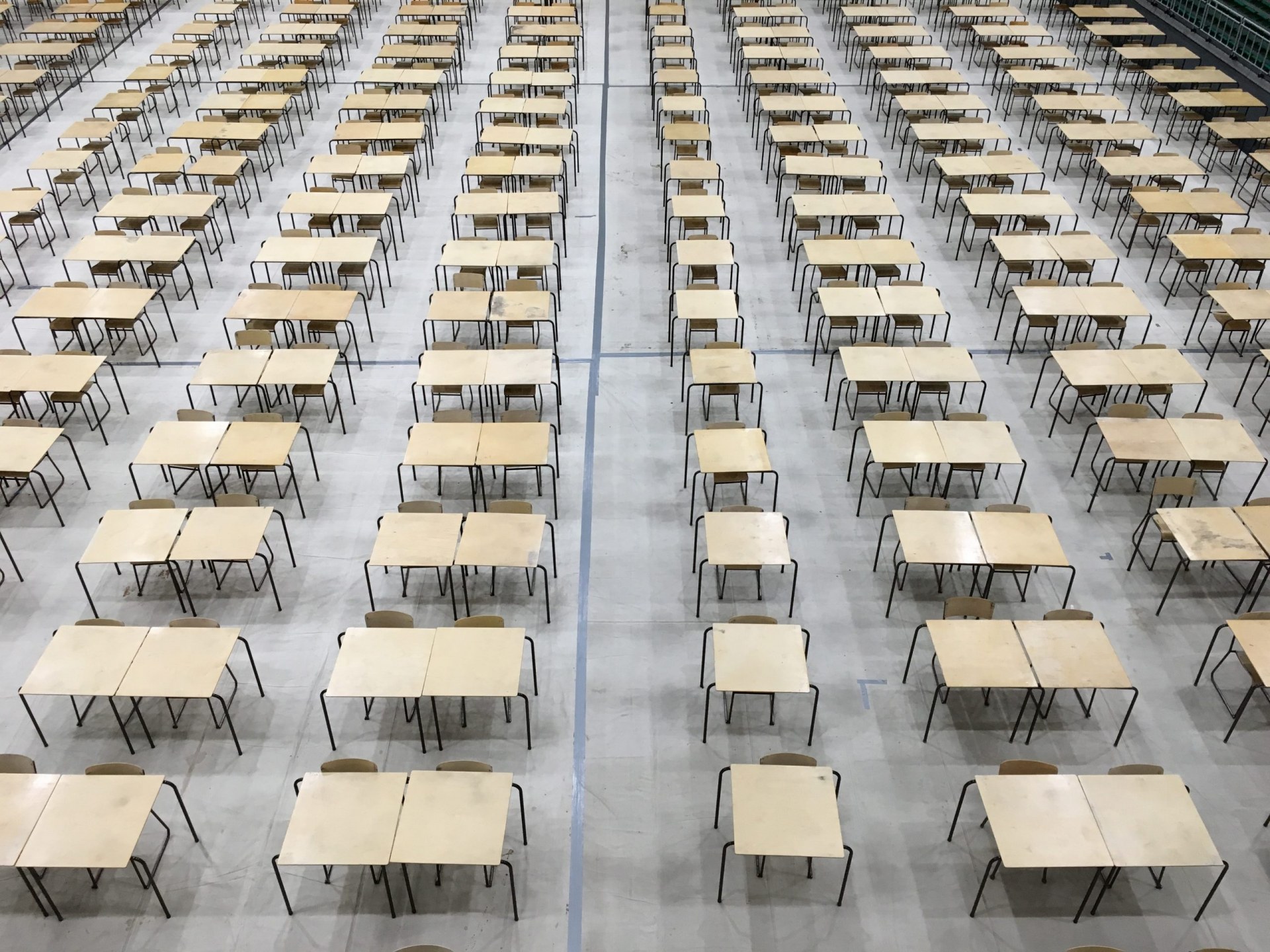 Your neck is on the guillotine. Its sharpness gleams above you, the base is already cutting into your throat. You’re choking on blood.

The air in the exam room is as thick as your maths textbook. A weak beam of sunlight flutters with bugs above you; fellow students twitch, sigh, scribble. You hear a muted sob up the back. The twangy teenage perspiration is overpowering; normally you’re inured to it, but today it’s pungent. Reminds you of that English teacher’s description of Dante’s inferno, and seems you’re stuck in the eighth circle (though the seventh – violence – beckons). You curl your nose, try to push away at the nausea. A supervisor opens a door, allows a smidgeon of coolness to sneak in.

A poem echoes in your skull like a bad seventies’ song. Hymne to God my god in my Sicknesse. No! Forget Donne, forget last week’s English exam – you’re sure you failed that miserably, it’s permeated your grey matter like a tumour. Now’s the time to focus on Modern History, dammit.

You bite frantically at your pen as you try to understand the HSC question, its typeface hazy and teasing:

After all these months of study your mind is mutinous. In revolt. To the point of numb. So how can you write an essay on this? World War 1, World War 2, they blur. Your jaw cuts into the pen’s plastic and a tooth jars. Why can’t you remember anything from your lessons? Germany…Great Britain…Soviet Union…Yes, these are places you’d love to visit…Squeezing your temples you start to count the number of students at this school (all of them rich kids, of course) that are taking next year off to travel. They’ve already booked, are already boasting about the sights they’ll see, drinks they’ll scoff, girls they’ll fuck. A whole year of fun fun fun before they hit uni.

You, however, cannot take next year as your gap year.

You look through the window at the cruel unrelenting blueness, but as always it promises and reveals nothing; you yearn for European seasons, clouds of snow, battering ice, trekking through green, lacy alps. Discos, beer and joints in murky Greek bars, exquisite art in the Louvre. Sex.

But it’s not for you.

You worked, yes, and tried hard to save money. At McDonalds, you suffered blistering acne and cringed like Quasimodo as the girls’ lips twisted in disgust. Worked in a butchers’ in Westfields, even got a job in a supermarket, stacking shelves at night. Dreamed of travel, constantly. But then you saw the flight prices, the cost of even the cheapest hotels, and knew deep down it was impossible. Dad snorted when you mentioned it, growled as he asked where you’d find the money. Maybe you can save up for the next four years and go after uni…if you get in.

Your classmate Saul is grasping the sides of his desk, knuckles white, forehead bowed, beseeching. He seems to be praying, enchained by the booklet before him; no doubt he’s waiting for the answer to spring from the page in logical, coherent wording. You look at your own exam. Yes, you’ve completed the multiple-choices, but you’re torn with uncertainty: maybe your answer to question 1 should’ve been B or C or D.

If only that rich prick Angelo hadn’t laughed when he heard you weren’t taking a gap year. ‘You’re that poor, eh?’ he smirked. Your cheeks were so purple (the pimples ballistic) you actually tried to hit him, but missed and tripped. Cut your hand. Luckily nobody told the principal or you’d have been suspended. Or worse. Your parents – well. Don’t think of them.

But you do. (Your brain refuses to listen, to relax!) Why is your mother always distressed over something? Like the other morning, the day of the Physics exam, when you wouldn’t – couldn’t – get out of bed…She didn’t listen. Screamed relentlessly about what she’d done for you, the years of tutorials they’d paid for, how you must do the exams or there was no hope, no future, everything rested on the HSC…And Dad of course, when he heard you’d been late for the test, had shouted over and over about the seven days a week he worked just so you could get through that expensive school, get a degree and find a top job but now you were just throwing it all away, wasting their dollars…You’ve heard it so many times.

The clock is racing, so fast, yet you know you’ll be stuck in here for hours. Days. A lifetime. Concentrate. For twenty minutes you try to write an erudite dissertation on the impact of Bolshevik ideology, and then are simply dismayed when you re-read your three paragraphs: are you a five-year-old? With eyes shut tight you press your brows, groan a little too loudly: Li turns quickly and squints at you, his face a giant question mark. You put your fingers to your temple in a gun shape, pull the trigger, gasp quietly; he grins and turns back to his desk.

You’re frozen by the incontrovertible fact – you read it somewhere on-line – that everyone who’s ever made it, be they wealthy or famous, sinners or saviours, went to university. If you aren’t accepted you’re done for. Life is over. The only way to succeed in this world is to win a good mark in this HSC. Your whole life – it all comes down to the next few hours. If your ATAR isn’t high enough for Law you can study Economics, but if you’re not good enough for Economics…Arts? And what if you can’t even get into that?

Not much chance of that.

Your parents sent you to a Protestant private school. You didn’t care that you kept failing Religion. Until you were called in, and warned. You never viewed it as a serious subject, but after you’d written those sarcastic lines in an essay…Well. Dad was so scarlet-mottled with anger you were sure a stroke loomed. Or your crucifixion. Instead you were grounded for two weeks and made to attend church every Sunday for a month.

God doesn’t seem to like your sense of humour.

Again you stare at that unrelenting sky and suddenly, mercifully, clarity cracks through your chronic thickness and your memory cranks into gear. Everything you’ve retained over the past six years surfaces in high definition on your mind’s display monitor. Gratefully you scrawl as the clock smirks at you, knelling noisily. Despite the overhead fans the room is heaving with heat; it tastes of exhaustion and fret.

You write and write. So why does that image of Alex flash up out of nowhere, like a glaring ad on a web page? You jolt, drop your pen; your brainwave withers immediately. Instead your internal screen is filled with the funeral last July, the adults all in shock, demanding explanation of the suicide. Doctors and teachers and government spokespersons contradicted each other in the news regarding the pressure on HSC students. Round and round in a huge hot air balloon they jabbered, condemning the demands of the current education process. But changing nothing. You stopped listening, the screaming in your head draining you, sapping, until you were shattered. You’d seen Alex’s waxen face as he was rushed to hospital, his tongue lolling, and you were afraid. A demon whispered in your ear: maybe he’d made a wise choice.

Keep writing! Now is not the time to grieve for the unsettled past, nor the troubled future. Why won’t your brain listen? Ten minutes left! is jeeringly announced. The doomsday clock grins and tolls. You dribble some more words, try to throw in some impressive terminology. You must finish this!

But your conscience won’t stop hissing. How will you get a job? What job do you want? Need? How will you afford to live? Pay off your fees?  Your muscles lock tighter, you’re tied to the chair, your jaw is clenched…

Flicking back through the pages you glance at the multiple choice questions…Oh God, you have inserted the wrong answers! You’ve mistaken A for B, C for A…What the hell is the matter with you? Or – is it correct? You want to howl, howl.

You flinch as ‘Pens down!’ is screeched like chalk on a blackboard. But you haven’t finished, your conclusions are rubbish, your arguments far from compelling…Failure hangs around your neck in a heavy knot and jerks upward.

Out in the blinding sunshine the lurching pale bodies try to avoid each other. Nervous laughter, sorry jokes; nobody mentions the questions. You head off with Li. At the railway station he lights a cigarette. You take a puff, your skin steams with relief and fear, then you gaze at the train line.

— What are you thinking about? he asks.

You look at him, weighing the curious cocktail of relief and dread, then shrug.

You hand him back his cigarette. He nods, slowly.

—  Me too. But maybe not today, eh? Let’s go get a kebab. A reward for surviving today’s shit.

The track is long and dark and lonely. You keep staring at it, your hands shaking like an old man’s.

— I’d rather a kebab than the crap they serve up in hospital, mate, he says. Or at funerals. And anyway, we shouldn’t let those bastards get us down. Don’t let em win. You coming?

His hand is on your shoulder pressing. His hazel eyes, weirdly serious, peer into yours. Suddenly, if there’s only one thing in the world of which you’re certain, it’s that you must not let him down. Not your friends. Not ever.