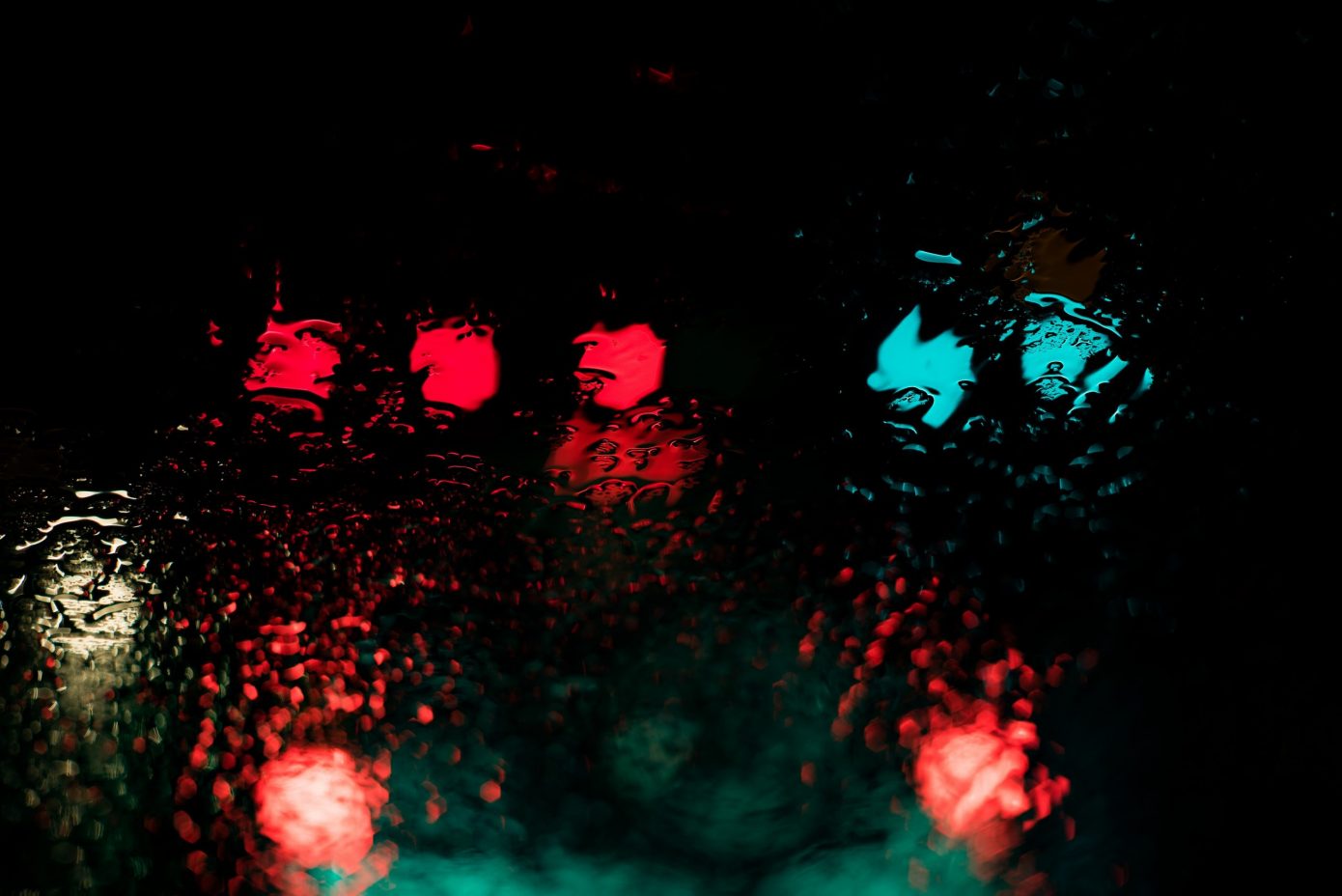 Geoffrey’s phone rang. It was Lucy.

“That’s Lady Bureaucrat to you, buster.”

“I’ll call you the Secretary-General, will I?” said Geoffrey.

“We in the business say Sec-Gen.”

“Which leads to the obvious.”

“Whatever floats your boat,” said Lucy.

“Are you driving?” said Lucy.

“It’s gone eight o’clock here, so it’s after ten where you are. Where are you going at this hour?” said Lucy.

Geoffrey peered into the night as it sped towards him. Thick rain was falling from sightless clouds. His wipers thrashed pools from his windscreen as his headlights stabbed at the oncoming dark. The lights of returning weekenders swept like white flares in front of him and were gone. He thought he was the only one heading away from the city at this late hour.

“Dave hopefully,” said Geoffrey. He dipped his high beam for an oncoming car and checked he was not too far above the speed limit.

“Have you not heard from him?” said Lucy?

“Do I sense some concern about him?”

“So why the urgency?”

He explained to Lucy how Hannah, Dave’s wife had rung. How she had not heard from Dave since Friday, and how it was not like him to disappear at all, let alone for a weekend. She had said Dave hadn’t been sleeping well lately, and was distracted by something, but wouldn’t say what. She thought it might have been connected to Slabs’ accident, a grief response perhaps, but for some reason it felt a bit different than that. She just couldn’t put her finger on it. Would Geoffrey know anything? Could he help?

He told Lucy that when he, Geoffrey was at her place, she had looked distraught, and paced about the room they were in. She was obviously concerned for her husband’s safety.

Geoffrey didn’t tell Lucy what Hannah had said about Dave’s state of mind.

“He muttered something about this lamp,” Hannah had said, and had pointed to the lamp Geoffrey had identified in his vision of his friend, way back, when was that? Only a week ago? Or was it two? He’d lost track of time. It felt like ages, it had all been so intense.

“He said we were going to change the stand,” Hannah had said, and had picked it up and looked at it. “Why would he say that, do you think?”

Geoffrey had shrugged and said to her, “He showed me a picture of it the day you bought it.” He didn’t add that he, Geoffrey, had seen it some sixty years hence with a different stand, with Dave’s still body beside it.

He told Lucy he had assured Hannah that it would be alright, that he would make inquiries and keep trying to contact Dave.

“And you obviously tried to call him,” said Lucy.

“So why are you headed down the coast?” said Lucy.

“Hold on,” said Geoffrey. He clung to the steering wheel while a truck rumbled towards him flung a curtain of water across his windscreen. It took the wipers two or three cycles before he could see again.

“It sounds like you’re driving through a swimming pool,” she said.

“Do you have to get down there tonight? You can’t stop in a motel and then continue tomorrow? Or at least stop until rain lets up.”

Geoffrey had spotted the conundrum as soon as he’d set off for the coast. He knew Dave was safe, that he at least would not be dead. He had seen Dave at his last moment, in his nineties. It was like the time with his father, when Geoffrey knew everything would be alright even though his father was on death’s door.

But even so, he felt an underlying disquiet. He was still concerned for some reason, and wanted to make sure Dave was okay in every other respect.

The meeting with Hannah had made Geoffrey realise that his friend had been sorely affected by what they had shared. Despite his scientific outlook, he had evidently been thrown off course, especially in light of what happened to Andrea. He realised that Dave had been helping him, not just out of concern for his wellbeing, but for his own as well. Dave had wanted to prove this whole thing wasn’t real.  The lamp experience, the hobo, the patients in ICU. Dave had risked his professional standing in the hospital, not just to look after Geoffrey, but to assuage his own fears that what was going on might be real.

It was something that Geoffrey knew would cut across everything Dave thought about the world. Dave was a scientist through and through, and a doctor, whose practice and skill was based in the hard materiality of the flesh and its limitations. Testing and verification were hallmarks of reliable treatment. Everything was explicable in diagnostic terms, and if he and his colleagues were unsure of a diagnosis, it was not a failing of the underlying science, but a deficiency in their ability to fully investigate the problem.

Yet here was a phenomenon that defied all Dave’s experience. It was an inexplicable way of knowing. It was not investigative, but visual, intuitive almost. So Dave had applied testing methods to it – the lamp, the ICU patients and the envelopes, the hobo, and most devastating, Andrea. Geoffrey’s visions threatened everything Dave knew about the world. It threatened his sense of self.

Geoffrey felt guilty for dragging his friend into his mess. He hadn’t appreciated how badly affected Dave might be. He always looked upon Dave as a stalwart of reason and support, which is why he had phoned him on the Sunday after the accident. But in doing so he had flung Dave into a pit of confusion.

That’s why he wanted to find him as soon as he could: to return the favours Dave had extended to him. To return the care, and try to sort out what it might all mean. To return Dave to some normalcy, which meant to his loving wife as well as his own sense of order.

“And why the south coast? Do you know where he is?”

“A hunch,” he said. He squinted as a car drove by without dimming its lights. Tiny alarms went off in his eyeballs and he was momentarily blinded.

“So you’re tearing down the coast in the driving rain to some place you’re unsure of on the basis of a hunch,” said Lucy.

The Shack Davenack.” Geoffrey peered into his dashboard to make sure he was not too much above the speed limit. The windscreen wipers maintained their rhythmic labours in the wet. “In our early twenties I had a client called Davenack who made industrial products, and we had a pair of their baseball caps. You know, corporate branding stuff. We called ourselves the Davenack Brothers, like we were in some secret gang. They had a river side shack down south which they let us stay in. It was pretty run down, but the Davenack Brothers would spend a day fishing in the river and hunker down for the night in the old shed with a bottle of cheap plonk and some freshly fried mullet.”

“What can I say, we were two young men.” He blinked and swore as another car dipped its headlights too late.

“What was that?” said Lucy.

“Just a car,” said Geoffrey. “Sometimes they delay dipping their headlights, and it blocks your vision.”

“You be careful, okay?” said Lucy. “You’re below the speed limit, yes?”

He checked. Still only ten above. A bit more perhaps.

“I don’t know, it might be a complete mistake. But you know how when you text someone and they reply, three greyish dots appear on the phone, while they type. When I texted Dave and said, ‘Are you at Davenack?’ the three dots appeared but then he never replied. So I figured I’d give it a shot. Might be a long shot, but it’s all I’ve got to go on.”

“Tell me about today where you are,” sad Geoffrey as he stared into the bleakness unfolding in front of him. Raindrops lit like fireworks in his high beam and exploded on the black road beneath the car.

“I was going to grill you about the festival you went to,” said Lucy.

“Okay. First up the weather here is fantastic.”

“Cops,” said Geoffrey. He looked at the flashing blue and red lights that were creeping up behind him. They seemed unattached to anything at first, just flashes of blue and red disembodied from the black shadow beneath them.

Geoffrey tried to slow to the speed limit without using his brakes in the hope that they would not realise he was speeding. But the car drew close and the siren sounded.

“Damn,” he said. “It’s me.” He braked and pulled over to the gravel shoulder on a broad curve in the road. The police car stopped behind him, the lights still pulsing atop the rainswept roof of the car.

“What for?” said Lucy. “You said you were under the speed limit.”

“Yeah, I don’t know. It’s pretty dark. They might be checking anything.

He looked in his rear vision mirror as a highway patrol officer opened his door and stepped into the teeming rain. The officer’s shadowy figure grew bigger in the mirror. Geoffrey looked at the time on the dashboard clock. 10.46. He had hoped he’d be at the Shack by now.

A face appeared in his window and he lowered the glass. Rain spat in and he shifted to one side to dodge it. The police officer said,

“Do you know how fast you were going, sir?”

Geoffrey looked at the man’s face in the gap in the window.

The policeman took a small step back from the car. Geoffrey saw the white beam of the rig loom behind them. The rain shattered in the lights, and a halo of yellow ringed the cabin of the rig. The left side of the policeman’s face burned in the light.

Panic snapped in Geoffrey’s mind and he swore, then ripped off his seatbelt. He scrambled to the passenger side of the car and fought frantically with the door handle to push it open. A mighty horn sounded. He screamed. He was flat across the seats and grabbed the door edge to pull himself out as the roar of the wayward rig enveloped his senses.